When the Duchess of Cambridge, Nicola Peltz and more celebrity and royal brides released their wedding photos, fans were quick to analyse every beautiful detail of their bridal dresses, but there were a number of hidden messages that weren’t necessarily visible.

From sentimental dates to symbolic motifs, look back at how the likes of Ellie Goulding and the Duchess of Sussex paid tribute to their partners and families with their thoughtfully-designed gowns.

WATCH: Most spectacular royal wedding dresses over the years

Nicola Peltz married Brooklyn Beckham in an elegant square-neck wedding dress by Valentino’s Pierpaolo Piccioli. It featured a sentimental message from her mother Claudia, alongside an evil eye to protect her on her big day, which not even the bride knew about until after the ceremony.

In an interview with Vogue, the Transformers actress revealed the message, stitched in blue thread for her ‘something blue’, read: “Nicola, my heart. You are me, I am you. All my love, all my life, my beautiful girl, inside and out. Love, mom.” 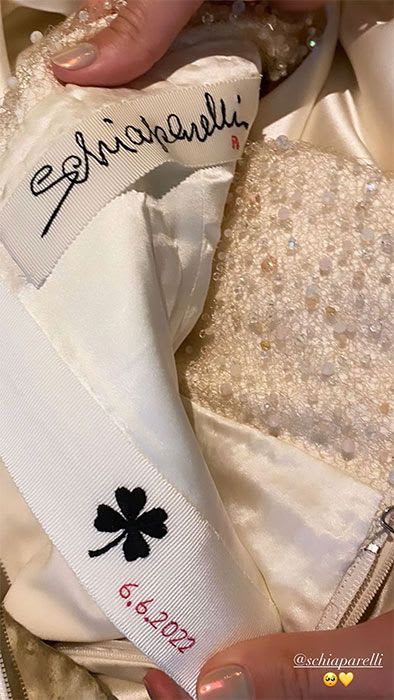 One detail that was not visible, however, was the stitching inside her dress. Alongside the signature of the designer, Pixie had the date “6.6.2022” embroidered, alongside a black four-leaf clover which is said to stand for faith, hope, love, and luck.

SHOP: Pixie Lott’s vivid yellow bridal earrings stole the show – and you can too with these lookalikes

When Gwen Stefani and Blake Shelton tied the knot in 2021, the bride rocked a show-stopping two Vera Wang bridal gowns, and one paid a sentimental tribute to her family.

In a photograph posted by fashion stylist Rob Zangardi, Gwen’s jaw-dropping veil was revealed, and it featured the name of her new husband and her sons Kingston, 16, Zuma, 13, and eight-year-old Apollo. 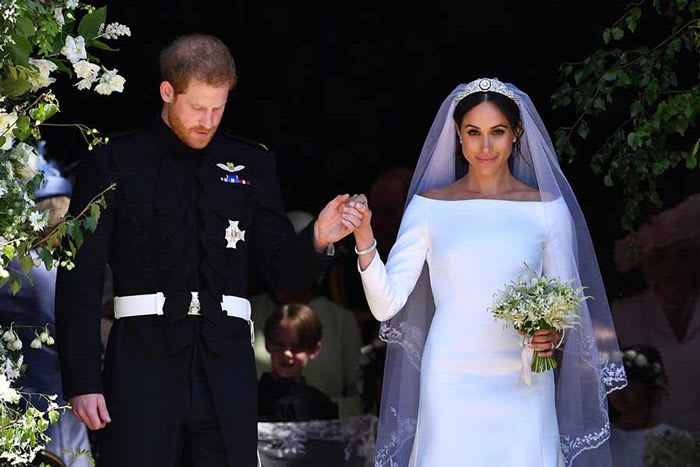 The Duchess of Sussex was keen to incorporate some subtle tributes to the Queen and her new role in the Commonwealth within her bridal look. Her bespoke Givenchy gown and veil featured flowers sewn into her veil to represent the 53 nations of the Commonwealth, along with the California poppy to represent where she’s from, and the Wintersweet, which grows in the grounds of Kensington Palace. Last but not least, as her ‘something blue’, Meghan had a small piece of fabric from the dress she wore on her first date with Prince Harry stitched into her veil. 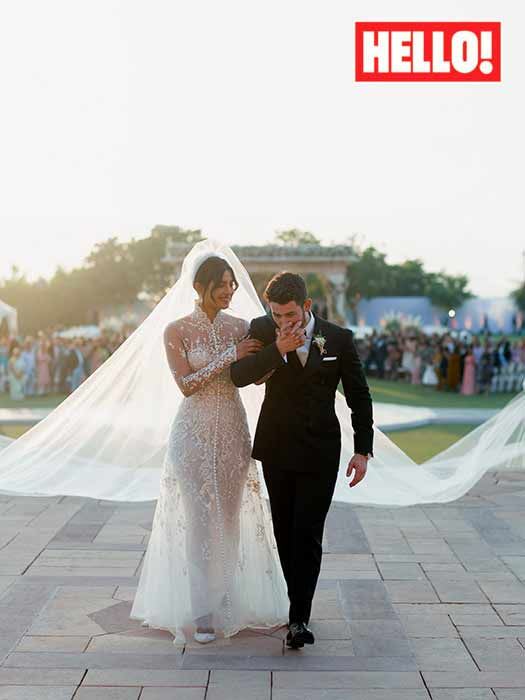 Both Priyanka Chopra and her groom Nick Jonas had sweet messages to each other within their wedding attire when they married in 2018. Priyanka’s custom Ralph Lauren wedding dress had eight words in hand-stitched embroidery, specially chosen by the bride. The words and phrases included, Nicholas Jerry Jonas, 1st December 2018, Madhu & Ashok, Om Namah Shivay (a Hindi mantra invoking Lord Shiva), Family, Hope, Compassion and Love. In addition, Priyanka had a piece of her mother-in-law’s lace wedding dress sewn into her dress. In return, Nick added a small piece of lace from the bride’s dress embroidered with the Urdu words “My Jaan” which translates to “My Life”, inside the lapel of his tuxedo. Aww!

SHOP: Where to buy wedding dresses online in 2022

For her wedding to Matthew Koma in December 2019, Hilary Duff asked her wedding dress designer, Jenny Packham, to add their initials in embroidery on the inside of the dress’s skirt. “There’s a very modern shoulder. When we were coming up with the design, it was important to me that it was striking but simple. I couldn’t imagine wearing a big fluffy dress,” Hilary told Vogue at her wedding dress fitting. 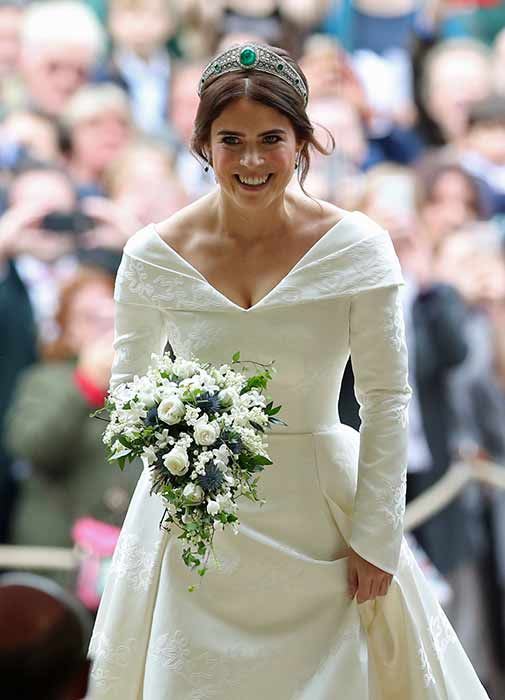 Just like the Duchess of Sussex before her, Princess Eugenie also incorporated a subtle nod to her royal heritage and her relationship with Jack Brooksbank in her wedding dress, which was designed by Peter Pilotto and Christopher De Vos. The team identified four symbols significant to the couple; the thistle for Scotland and their love of Balmoral, a shamrock paying homage to Sarah Ferguson’s family in Ireland, the York Rose, and ivy to represent the couple’s home, Ivy Cottage at Kensington Palace. The pattern was woven into a jacquard of silk, cotton and viscose blend, creating an understated but sentimental addition to Eugenie’s gown. 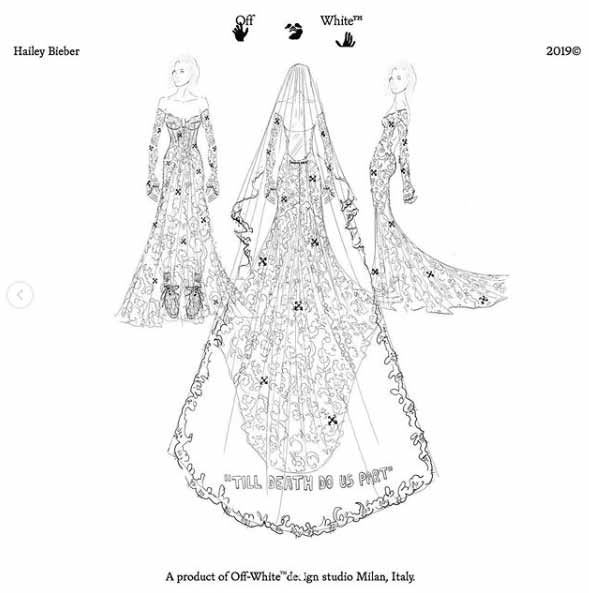 “From day one, I said I wanted Virgil,” Hailey told Vogue at her dress fitting. “I didn’t want somebody who was a wedding dress designer. I just feel like my style and my street style is such a part of who I am, and Virgil has always been in my corner since the beginning.” 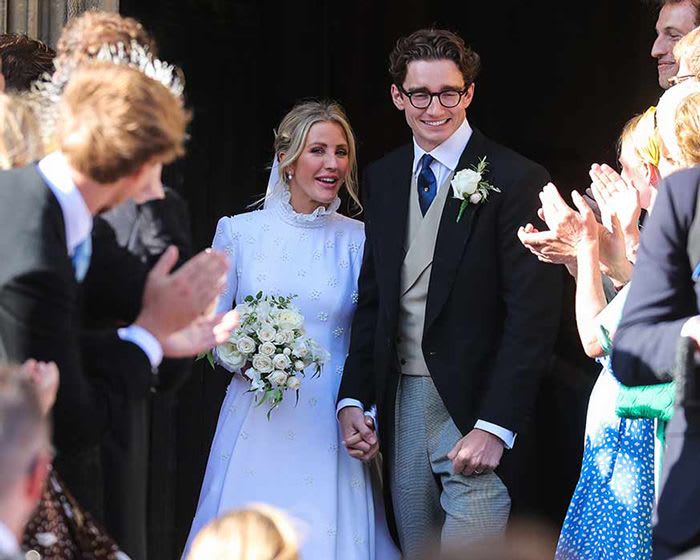 There was lots of symbolic detailing in Ellie Goulding’s Chloé wedding dress, designed by Natacha Ramsay-Levi. As she was marrying at the historic York Minster, her gown was embroidered with White Roses of York and had Victorian references woven into the design. Meanwhile, Ellie had the initials of herself and her husband Caspar Jopling embroidered into the veil.

“Natacha has created the most delicate and unique dress from the specific references and ideas that I gave her. I was rendered totally speechless when I saw it come to life,” Ellie told Vogue. “The dress itself is made of silk crêpe, hand-embroidered with White Roses of York and subtly embellished with white glass beads, doubled with a silk radzimir petticoat. Overall, I know the Chloé ateliers spent hundreds of hours to bring the design to life. The veil is made of delicate silk tulle and organza, and embroidered with our initials – E and C.” 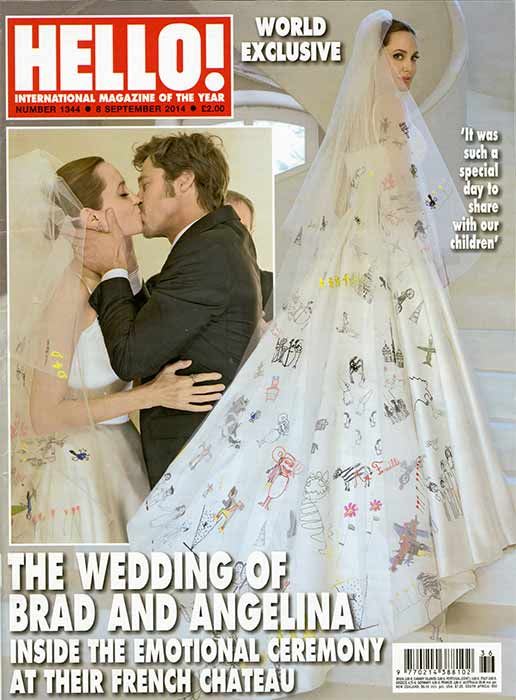 There was nothing secret about the sentimental additions to Angelina Jolie’s Versace wedding dress when she married Brad Pitt in 2014; the Tomb Raider actress paid tribute to their children – Maddox, Pax, Zahara, Shiloh, Vivienne and Knox – by having their artwork on her gown and veil. 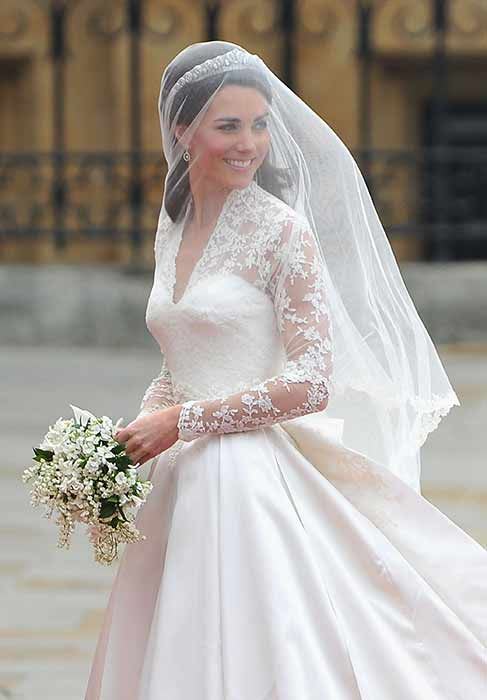 The lace on the Duchess of Cambridge’s wedding dress, which was designed by Sarah Burton for Alexander McQueen, featured elaborate applique on the bodice incorporating roses, thistles and shamrocks, which traditionally represent England, Scotland and Ireland.

Harry Kane’s wife Kate added a very special personal touch to her strapless Ralph and Russo wedding dress by having the names of her husband and their two daughters, Ivy and Vivienne, embroidered in blue writing on the inside of her train as her ‘something blue’.