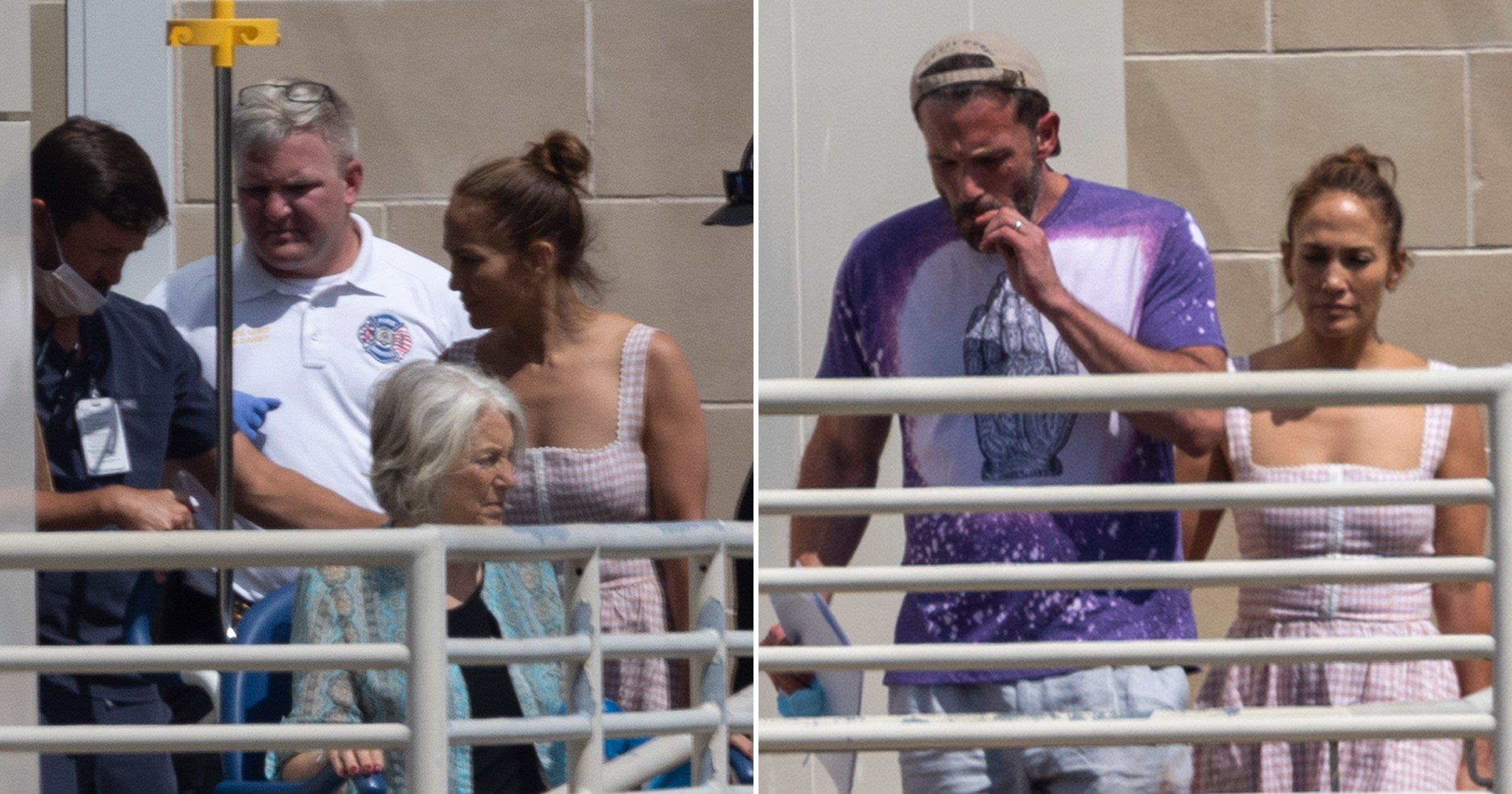 Ben Affleck and Jennifer Lopez were pictured visiting his injured mother in hospital, hours before their three-day-long wedding celebrations.

The famous couple were seen outside Savannah hospital on Friday after an incident at her son’s Georgia estate supposedly left Ben’s mother needing medical attention.

According to reports, Chris Anne Boldt, fell off a dock and cut her leg at the Riceboro property where Ben and Jennifer are holding a huge party this weekend to celebrate their recent nuptials in Las Vegas.

She is said to have been rushed to hospital requiring stitches after the Batman actor called the emergency services upon finding her at his house.

Photos obtained by DailyMail.com show the Gone Girl star and Love Don’t Cost A Thing singer taking a breather outside the hospital and chatting to staff.

A downcast Ben, who recently celebrated his 50th birthday, removed his face covering to puff on a cigarette while his new wife stayed by his side. He wore a vibrant tie-dye shirt and a pair of casual grey shorts.

Upon arriving at the hospital, JLo, 53, carried a Christian Dior tote bag and wore a gingham pink summer dress. She was later seen offering her support to Ben’s mother while she sat in a wheelchair.

Ms Boldt had a gauze on her leg after treatment, but a source told Mail Online that, thankfully, the incident was ‘not serious’.

The reassurance came after an ambulance was seen speeding into Ben’s Riceboro property around noon, spending 20 minutes at the house before the Liberty County Medical Center vehicle raced north.

An insider said at times the ambulance reached more than 120mph as it flew down the highway under police escort.

Ms Boldt’s injuries came as the Good Will Hunting and Hustlers stars prepared to welcome guests for their wedding bash this weekend.

It’s understood that a main ceremony will still go ahead on Saturday, with a family barbecue scheduled for Sunday.

As for Jennifer’s mother Guadalupe, she was seen arriving at Savannah Hilton Head International Airport on Thursday while party preparations got underway, including the installation of a huge white marquee on the lawn.

Ben bought the $8million (£7.6m), 86-acre estate in 2003, when he was engaged to Jennifer the first time around, before splitting in January 2004 and rekindling their romance years later in May 2021.

Sharing the happy news with her fans, she wrote in her online blog later: ‘We did it. Love is beautiful. Love is kind. And it turns out love is patient. Twenty years patient.

‘Exactly what we wanted. Last night we flew to Vegas, stood in line for a licence with four other couples, all making the same journey to the wedding capital of the world. Behind us two men held hands and held each other.’

In front of us, a young couple who made the three hour drive from Victorville on their daughter’s second birthday—all of us wanting the same thing— for the world to recognise us as partners and to declare our love to the world through the ancient and nearly universal symbol of marriage.’

She continued: ‘They were right when they said, “all you need is love”. We are so grateful to have that in abundance, a new wonderful family of five amazing children and a life that we have never had more reason to look forward to.

‘Stick around long enough and maybe you’ll find the best moment of your life in a drive through in Las Vegas at twelve thirty in the morning in the tunnel of love drive through, with your kids and the one you’ll spend forever with. Love is a great thing, maybe the best of things-and worth waiting for.’

JLo signed off with her full – and new – married name: Jennifer Lynn Affleck, confirming details from the marriage licence that saw her indicate she was taking her new hubby’s last name.