Britney Spears: Im Done with My Family and I Demand Justice! 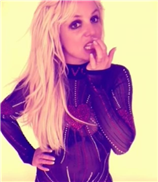 Britney Spears is done with the BS.

The singer has been mostly an open book on Instagram over the past several months, lashing out specifically at her father for the evil ways he controlled her as executive of Britney’s estate for well over a decade.

But Spears didn’t reserve her vitriol for Jamie alone.

A few days after hurling some shade at her sister, Britney jumped back on social media yesterday.

For a change, the artist didn’t post any scantily-clad photos in this case, however.

Instead, she shared a picture of some flowers and a type writer and opened her caption as follows:

“I found my mini typewriter !!! Don’t you find it weird when you jump through hoops to organize trips or set up lunch dates with people you love only to know they’ll bail on you or leave after 10 minutes.”

Britney went on to label this sort of thing as “humiliating,” and then related it to those who have claimed to care about her over the years.

“It’s like every person I’ve ever opened to immediately says they’ll be gone on a trip for two weeks after,” she continued, adding along these llines:

“OK I get it … they’re only available to me when it’s convenient for them.”

Ever since major questions over her conservatorship have been dominating the news — since early summer, basically — Spears has been making these kinds of references.

Where the heck were they over the past 13 years?

Where were they back when she was being abused by Jamie, as Britney outlined during a court hearing in June?

“I’ve lied and told the whole world I’m OK and I’m happy. It’s a lie,” she confessed at the time.

Having won a victory over her father in courrt, Britney is now going on the attack.

“I’m no longer available to any of them now!!! I don’t mind being alone … and actually I’m tired of being this understanding Mother Teresa,” she added in her latest post.

And in case it wasn’t clear to whom Spears was referring herer?

The pop star concluded as follows:

I know the conservatorship is about to be over but I still want justice !!!

Last month, a judge suspended Jamie Spears as a conservator after his Grammy-winning daughter made shocking allegations of abuse.

The court is expected to rule whether to dissolve the guardianship for good next month.

Let’s all hope he or she does the right thing.

Let’s all hope he or she completes this process and, at last, truly frees Britney.