Chrissy Teigen was a proud wife as she tweeted video of John Legend’s inaugural dress rehearsal performance on Twitter. She was then ‘scolded’ for spoiling the surprise.

Chrissy Teigen is the queen of social media, and it was no surprise to her followers when she documented her family’s pre-inauguration day activity. She shared video from leaving L.A. to arriving in Washington D.C., where husband John Legend will be performing at soon to be President Joe Biden‘s televised inaugural evening event Celebrating America. But she got a little carried away by showing her talented hubby’s performance setting at his dress rehearsal. The 35-year-old shared behind the scenes video snippets with fans, which she was NOT supposed to do.

Chrissy first shared a video looking from the lit-up Lincoln Memorial, then panned across to show the stage where a military band in their dress uniforms were standing. Behind them was the reflection pool with the lights on either side from the COVID victim memorial service held by Biden and incoming Vice President Kamala Harris, 56, just prior to the dress rehearsal.

The cookbook author said how the view was “amazing” as she showed the Washington Monument lit up in the distance with the U.S. Capitol just beyond it.  It really was such a moving sight, and to be there in person had to make one so emotional and filled with pride to be an American. 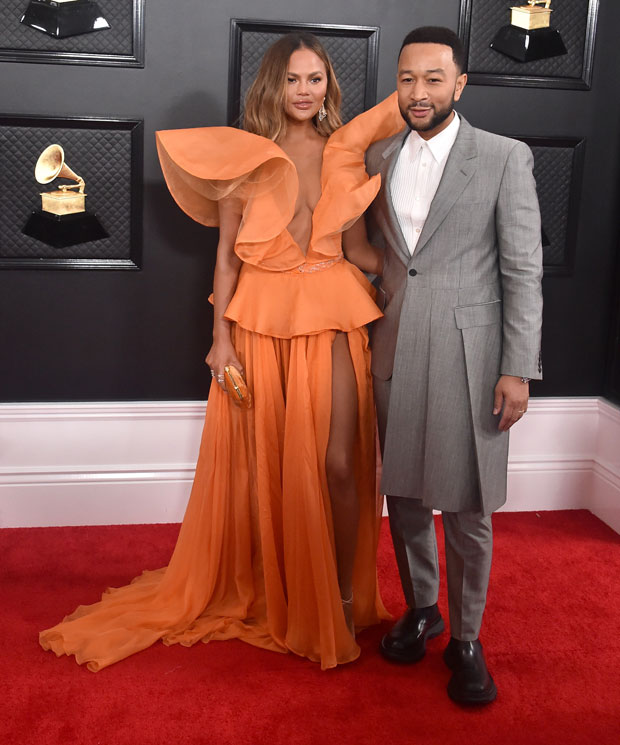 Chrissy then shared a five second shot of the military band onstage from a closer angle and what appeared to be John in a long coat in front of the band. While she didn’t share what song he performed, the mother of two was so moved by it that she wrote “John! I’m going to cry” in the tweet along with the video.

Apparently no one told Chrissy that the details of the event and it’s setting were supposed to remain a secret until the Jan. 20 prime time inaugural special Celebrating America kicks off at 8:30 p.m. ET on Wednesday night. Tom Hanks will be hosting the televised event, where both Biden and Harris will speak. Others performing with John at the Washington D.C. location include Bruce Springsteen and the Foo Fighters, while actresses Eva Longoria and Kerry Washington — who each hosted nights during the Democratic National Convention — will also appear. Jon Bon Jovi, Demi Lovato and Justin Timberlake will also perform, albeit remotely.

Chrissy followed up her dress rehearsal videos with a tweet saying, “LMAO apparently that was all supposed to be a secret and i got scolded so act surprised tomorrow I’m crying.” Apparently she was watching John’s rehearsal alongside Kamala’s niece Meena Harris, 36. After Chrissy tweeted about getting “scolded,” Meena jokingly wrote “I’m done with you lol.” Chrissy the responded “Meena help lmao you gotta tell me this stuff!” about not sharing video of an event that was supposed to be kept under wraps until it unfolded live for Americans to watch on inauguration night.

While Chrissy may have upset event producers, the Secret Service and who knows how many others by sharing the behind the scenes rehearsal, at least she and John treated military personnel protecting the area to a photo with couple. John and Chrissy posed while surrounded soldiers in their fatigues while heading to the dress rehearsal. Chrissy proudly shared the photo to Twitter, and wrote, “lmao we got lost on the way to soundcheck but I just got to meet these f**king actual heroes.” Now THAT is a photo that was totally okay to post and likely made those brave men and women’s day.