Cmon Cmon: Read The Screenplay By Mike Mills Inspired By His Own Take On Fatherhood

Editors note: Deadline’s Read the Screenplay series debuts and celebrates the scripts of films that will be factors in this year’s movie awards race.

“There’s a constantly interesting back-and-forth you have with a child that we rarely talk about,” C’mon C’mon writer-director Mike Mills says. “It can be as light as playing but then it can be as deep as any adult relationship you’ve ever had.”

That broad spectrum between loose and playful and soberingly serious drives the dynamic between the A24 film’s two leads. In the midst of cross-country travels for an ambitious assignment documenting young people’s visions of the future, Johnny (Joaquin Phoenix), a driven, independent, unrooted middle-aged radio journalist, is unexpectedly thrown into taking on the care of his bright, perceptive 10-year-old nephew Jesse (Woody Norman), which proves both a shock to Johnny’s system and a balm for his soul.

“With C’mon C’mon, I wanted to play with opposing scales,” says Mills. “On the one hand the film is about the smallest of moments: giving a kid a bath, talking before bedtime. On the other, you’re traveling to big cities, hearing young people think out loud about their futures and the world’s future, so the intimate story is happening in the context of a far larger one. I often feel this same spectrum with my son: our time together is so private, yet the biggest concerns of life are all there.”

Mills was inspired by his own midlife foray into fatherhood: “Johnny has to learn everything a parent learns but very, very fast,” he says. “As a father, I’ve found that you feel you’re constantly a novice, trying to keep up as things shift, and this was a way of re-creating that confusion, that always being not quite ready for what’s happening.

“Of course, you don’t have to be a biological parent to experience that,” he adds. “You can be an uncle, an aunt, a teacher, or caretaker.”

Mills used the well-established structure of the road movie genre as a story map – Wim Wenders’ Alice in the Cities proved an especially potent influence. “Like Wenders, I wanted to explore a child character as a creature with volition, concerns, and wants, and fears that are as valid as any adult’s,” he says.

After crafting the script, during filming Mills kept open to discovering improvisational moments that added deeper textures of authenticity including recording perspectives on the future from real-world schoolchildren and incorporating the deepening real-life bond between Phoenix and Norman during filming.

“What started as me trying to document and think my life with my kid became equally a portrait of the relationship that developed between Joaquin and Woody,” Mills says. “I really tried to embrace that and let the camera capture that. And that’s when I get most excited as a filmmaker: when things feel that alive, unpredictable, surprising.”

Click below to read Mills’ script for C’mon C’mon, which premiered at the Telluride Film Festival, was named a Top 10 film of the year by the National Board of Review and has been nominated for three Independent Spirit Awards including for the screenplay, directing and Best Feature. 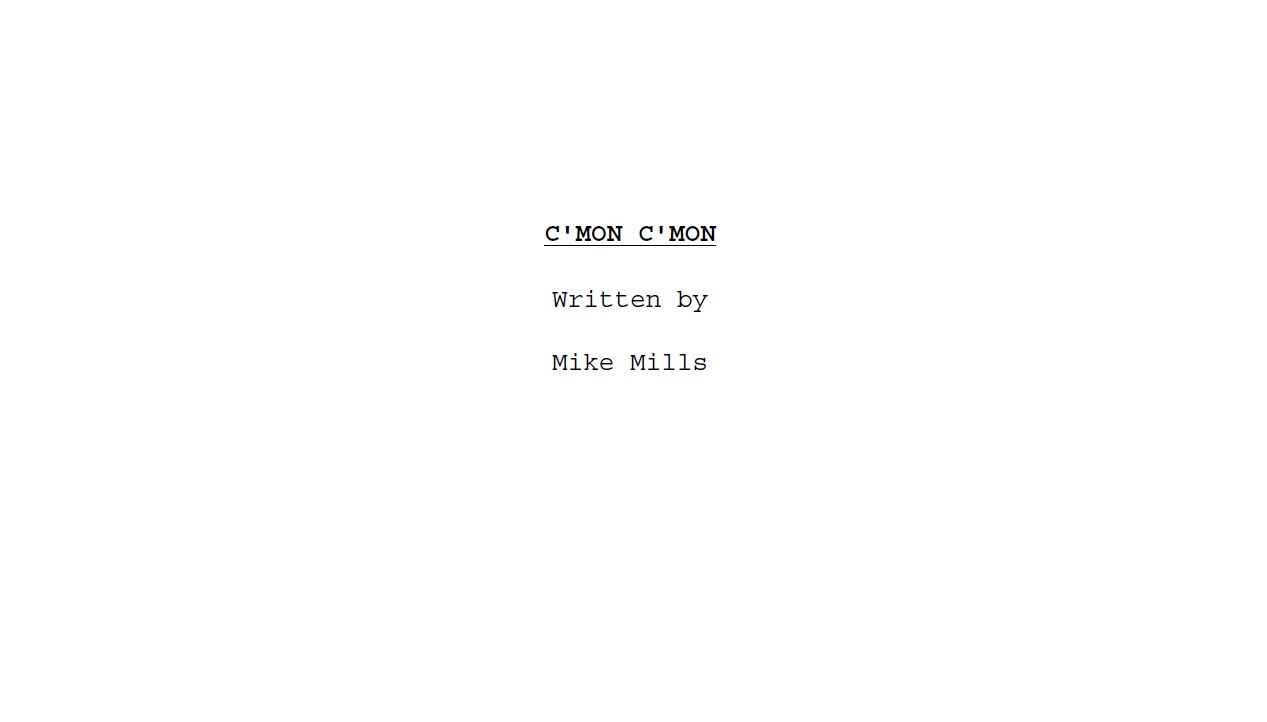 ABC Says Show Will Have A Host This Year; Glenn Weiss To Direct For Seventh Straight Time

‘Don’t Look Up’: Read The Screenplay For Adam McKay’s Satire At The End Of The World

‘Mass’: Read The Screenplay For Fran Kranz’s Stripped-Bare Story About Forgiveness And Healing