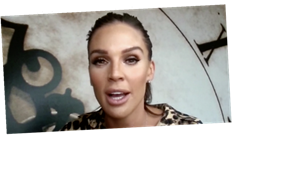 Danielle Lloyd has revealed she has been forced to put plans for another baby on hold as she has developed polycystic ovary syndrome (PCOS) and endometriosis.

The 36 year old glamour model had previously revealed hopes to have another baby with her husband Michael O’Neill and shared plans to use gender selection in order to have a baby girl.

But, Danielle, who is mum to four sons Archie, nine, Harry, eight, George, six, who she shares with her ex husband Jamie O’Hara and two year old Ronnie, who she has with husband Michael, has been forced to put her plans to have a girl on hold.

Speaking on Loose Women on Monday 29 June, Danielle, who revealed her bum and boob job gave her the confidence to sell sexy photos online, opened up on having to delay trying for baby number five.

Danielle told the Loose Women panelists: “I’ve just found out that I’ve got PCOS and endometriosis so I have to have an operation for that so can’t think about having another baby at the moment anyway.

“I’m in two minds, I’ve just got a puppy who is a little girl so she’s my baby at the moment. I would love a little girl but four boys is a lot.”

It comes just a year after Danielle revealed she had suffered a miscarriage in a heartbreaking post, as she shared an image which read: “I may have only held you in my womb for a moment but I will hold you in my heart forever.”

She also added to her story, in a post which read: “Thank you for all your lovely messages. Means so much to me and @gint1986.” Breaking her silence shortly after the tragic ordeal, Danielle shared her fears that she may never get her wish of having a baby girl.

Speaking in August last year, Danielle said: “It was devastating when the miscarriage happened and I was completely heartbroken.

“It was devastating. I definitely need a few months to get over it and have a breather.

“But I want to try again in the future – I really feel like I'm meant to have a girl. I've seen psychics who have said I'll have one, and I really believe in all that.” The reality TV star added that she would love a little girl to “complete her family”, revealing she would consider controversial gender selection.

She told Closer: “We thought about adoption, and that could be an option in the future.

“But we're going down to gender selection route first. Michael saw how upset I was after my miscarriage, and I can't put my body and mental health through another heartache by trying naturally.”

Related News:
Latest News:
What you didn’t know about Borat star Maria Bakalova
Reese Witherspoon & Ryan Phillippe Reunite to Celebrate Their Son Deacon’s 17th Birthday!
Blake Lively Celebrated Ryan Reynolds's 44th Birthday with a Savage Troll
Danielle Alcaraz reflects on being a Playboy Playmate: 'I've always been pretty comfortable in my skin'
Recent Posts
This website uses cookies to improve your user experience and to provide you with advertisements that are relevant to your interests. By continuing to browse the site you are agreeing to our use of cookies.Ok