Denise Welch hits back as viewer says enough is enough 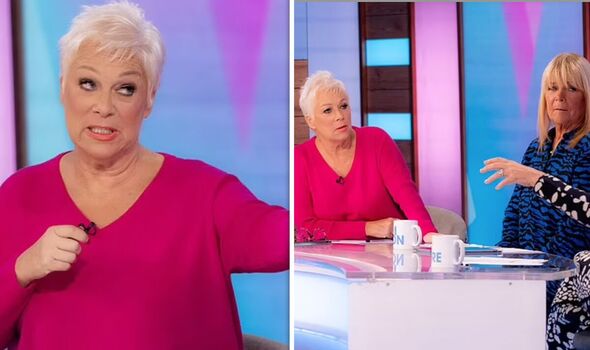 Denise Welch is known for not holding back on her social media, and today was no different as she hit back at a jibe aimed at her “endless stories”. The TV star told the sarcastic Twitter user to utilise the “off button” if they had no interest in hearing her speak on Loose Women.

In response to her appearance on Loose Women today, VanessaHodgesD typed: “Denise your endless, very long stories about yourself and your life are so fascinating and relatable,” as she added a rolling eyes emoji to reinforce her sarcastic tone.

The Twitter user also added a gif of Denise wearing a pink coat from her appearance on the Channel 4 soap Hollyoaks.

Denise quickly fired back: “Ask a family member to show you the off button.”

It comes as a couple of weeks ago Loose Women descended into chaos after Denise and Jane Moore locked horns in a heated row about Prince Harry.

The panel were discussing a leaked excerpt from his upcoming biography Spare, in which The Duke of Sussex accused his brother Prince William of physically attacking him.

Denise furiously defended Harry declaring herself “team Harry and Meghan” but was met by resistance from Jane who described his accusations as “hurtful”.

In his book, the Duke of Sussex described a stand-up row that ended with the Prince of Wales grabbing him by the collar and throwing him to the floor, shattering a dog bowl with his back. William then allegedly declared: “I didn’t attack you, Harold”.

Denise told Jane she found it “strange” that she was “so against Harry and Meghan” given her years working as a royal correspondent.

“Why shouldn’t Harry say his peace, Jane? I think he’s had to move away from a family, they’ve done it behind his back,” she shot.

Jane cut in arguing that Harry was only looking “to make money” before Denise fired back: “Jane, you talked to me about interrupting”.

“The fact is the Royal Family make quite a bit of money themselves,” she continued.

“They have been leaking stories. We know they have. As soon as Meghan was seen as the People’s Princess, that was game over, because William and Kate have to remain in those positions.

“Meghan was in those rooms on the global stage with charities, she didn’t do that just when she got married to Harry.

“I think do what you like. Tell your story because I think it’s absolutely the worst thing that’s happened to them.”

“Tell your story but not sell your story. Is it blind support or do you accept that they’ve made some mistakes,” Jane responded.

Denise added: “But I don’t see anything wrong in him getting his wife out of this country.

“This is the only way they’ve got to tell it. I’m team Harry and Meghan.”