In the first half of the documentary ‘Phoenix Rising,’ the ‘Westworld’ star details the depths of the alleged domestic violence she endured while with the rock star in her late teens and 20s.

It’s been nearly 15 years since an 18-year-old Evan Rachel Wood met 36-year-old Marilyn Manson at a Hollywood party, but for the first time, the actress known for her roles in True Blood and Westworld has come forward to tell her story about their relationship and the abuses she claims she endured during it.

The two-part HBO documentary Phoenix Rising, which originally premiered at the Sundance Film Festival, follows Evan as she takes her first steps in processing her journey as a survivor of domestic violence and help other women do the same. For years as an activist, Evan spoke of her abuse, but never officially named her “abuser”. On February 1, 2021, that all changed when she accused her ex-fiancé Manson of terrible acts of violence, and in the documentary, she goes into much greater detail.

One of the biggest shockers came almost immediately, when Evan revealed she branded herself with his initial to prove her loyalty to him. “He carved an E [into his skin] and I carved an M,” she explained, “… as a way to show ownership and loyalty. And I carved it right next to my vagina to show him that I belonged to him.” She shared pictures of the crudely carved letter on her skin, and later admits that she wishes she could have the “scar removed.” But that’s not possible.

Marilyn Manson With No Makeup: Photos Of The Shock Rocker 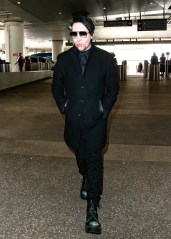 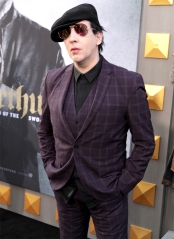 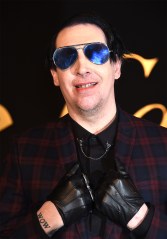 The reason? Since Evan has come forward, at least 15 other women have also alleged that the controversial rock star abused them as well, including Game of Thrones actress Esmé Bianco. Rachel explains that though the statute of limitations has run out for her to do anything, her story could help another one of these women stand up to Manson in court, and her “scar” is part of that. But naming him officially was not an easy thing for Evan to do.

“I’m still terrified to name Brian publicly,” she said of Manson, whose real name is Brian Warner, in the documentary. “I have received a number of threatening messages [from Manson supporters] saying to shut my mouth, people know where I live. Brian made it clear that if I ever said anything, he would come after me. He once told me he would fuck up my whole family, from the bottom up, and he would start with my dad.”

Evan and Manson were together on-and-off from mid-2006 through 2011, when Evan says she made her “final” escape. Despite being engaged to be married at one point, Evan recalls the relationship being “violent,” starting very early on. She recounts the filming of his music video, “Heart Shaped Glasses” in 2007, and she shockingly alleges that Manson raped her during the film shoot.

“We had discussed a simulated sex scene,” Evan said. “But once the cameras were rolling, he started penetrating me for real. I had never agreed to that … It was complete chaos and I did not feel safe — no one was looking after me … I felt disgusting and like I had done something shameful, and I could tell that the crew was very uncomfortable and nobody knew what to do. I was coerced into a commercial sex act under false pretenses. That’s when the first crime was committed against me — and I was essentially raped on camera.” She adds that in interviews after the release of the video where she called it “romantic,” she was only trying to save herself from making Manson “upset” back then.

Shortly before the documentary premiered on HBO, Marilyn Manson filed a defamation lawsuit against Evan over her rape and abuse allegations. In the documents, obtained by HollywoodLife on March 2nd, the singer accuses Evan and her activist associate Ashley “Illma” Gore, who also appears in the documentary, of having “secretly recruited, coordinated, and pressured prospective accusers.” Additionally, when filmmakers reached out to Manson for comment on the documentary, he denied all of Evan’s accusations.

“Mr. Warner vehemently denies any and all claims of sexual assault or abuse of anyone,” his lawyer said in a statement. “These lurid claims against my client have three things in common: they are all false, alleged to have taken place more than a decade ago and part of a coordinated attack by former partners and associates of Mr. Warner who have weaponized the otherwise mundane details of his personal life and their consensual relationships into fabricated horror stories.”

Though part one focuses mostly on the dark details of their relationship, the film, directed by the Oscar- and Emmy-nominated filmmaker Amy Berg, also covers Evan’s fervent activism since coming to terms with her abuse. She was instrumental in creating the 2019 Phoenix Act, a bill that extended the statute of limitations for domestic violence from three years to five in California.