Farrah Abraham: MTV is Racist for Firing Me! 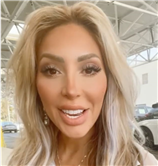 Farrah Abraham is officially back on MTV.

And Farrah Abraham is also officially back to trashing MTV.

This past Tuesday night, Abraham popped up on the Teen Mom OG reunion, recording a tease of an upcoming spinoff in which she actually appears.

She sounded excited to be there, too.

“I had such a good time catching up with you on the set of Family Reunion,” said Farrah from afar to Maci Bookout and Amber Portwood, referring to the aforementioned special.

She concluded on air:

“Now, it’s true, some drama went down… [but] have a great reunion.

Just a short time later, however, Farrah went ahead and slammed the network for which she now works once again.

Via social media, a follower asked Farrah why she was fired in early 2017 for taking part in various adult films… while Briana DeJesus still has a job.

DeJesus, a cast member on Teen Mom 2, has an account on OnlyFans and posts “her naked body all over,” as this follower noted.

She then took a swipe at MTV, calling it an “awful company.”

Abraham was let go by executives well over four years ago.

She stood her ground at the time, however, taking MTV’s parent company, Viacom, to task in a lengthy and angry online reply.

“Even though #Viacom fired me today they couldn’t help but to exploit myself & my daughter for their promotional gain,” she wrote in October 2017.

“Viacom let me go because as a Business Mogul I act like an adult and part take in adult promotions and activities that other adults do for FREE or in private !

“Even though I have successfully been to gentlemen’s clubs appearances they filmed and Viacom filmed me at the AVN’s & Viacom shows and glorifies showing couples having sex on their network.

“But as stated today ‘my brands press out shines the Teen mom Viacom press.'”

Abraham went on to say back then it was “sad” that such a tremendous program would no longer have its “biggest talent” because of alleged “sex-shaming” and “hate crimes” against her.

In the many years since she was given the boot, Abraham has never really left the spotlight.

She has vowed to never apologize and never change, and, hey, she’s certainly kept her word.

“I’m proud of myself not giving in to be sex shamed by Viacom network,” continued Abraham in 2017.

“Proud to not have a network take away financial opportunities for my goals, proud to be an Advocate for a healthy sex life, safe sex, teen pregnancy prevention and so much more while I run companies in different feilds and scale them.”

“Cheers to basically winning against hurtful disgusting executives who do way more in their personal lives then what I could ever be judged for-I will never be broken by hateful wrong people.”

Before signing off on the day she was pink-slipped, the reality star noted she hoped to write a book about the business lessons she had learned and the experiences she gained from working on television.

“Get out there [and] keep being you!” she encouraged her fans.

“[You’re] much better [than] all the politics & the people at the top who could never be at the top if it wasn’t for you! #godisgood.”

Indeed, even to this day, Abraham still thinks God has chosen her. For some reason.