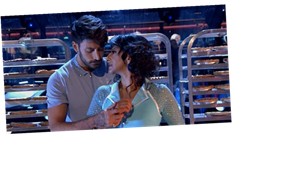 Rumours have been swirling about a potential romance between Good Morning Britain presenter Ranvir Singh and her Strictly dance partner, Giovanni Pernice.

Even judge Shirley Ballas commented on their "chemistry".

However, the dancing duo are doing little to quash the speculation as Giovanni, 30, was caught calling his partner "baby" during the show on Saturday, 5 November.

The Italian pro was heard during the show whispering into the 43 year old’s ear “come on baby” as they twirled around doing the Viennese Waltz.

The previously unheard moment was shared on the BBC Strictly’s Twitter, and after Giovanni’s words were picked up by his microphone.

The pair are heading into this weeks semi-final, after putting on an emotional display on Saturday dancing to She Used To Be Mine from the hit stage show Waitress during Musicals Week.

However, this is reportedly not the first time Giovanni has called Ranvir "baby", as in footage posted to Instagram from when they were dancing their American Smooth, he was heard saying: “Love you."

He continued: "Surprise. It's our song, baby girl. I love this song. I love you, let's go.”

In footage played ahead of their routine, Ranvir explained that she had grown in confidence since appearing on the show.

Judge Motsi Mabuse was teary-eyed while listening to her comments. She said: “I was moved from your words from your VT and I think every mom has a connection, but I'm more emotional about your dancing!”

Whereas judge Shirley said: “I love the flirting and teasing, there's definitely a strong chemistry between this team.”

Despite this, Ranvir has maintained that the couple's chemistry is just for the cameras.

Speaking on Good Morning Britain, the star said: “It’s quite funny isn't it?

"I've watched the show before and you want to believe in the dream.

“That's part of the magic of Strictly. It's make believe, it's fantasy it's beautiful.”