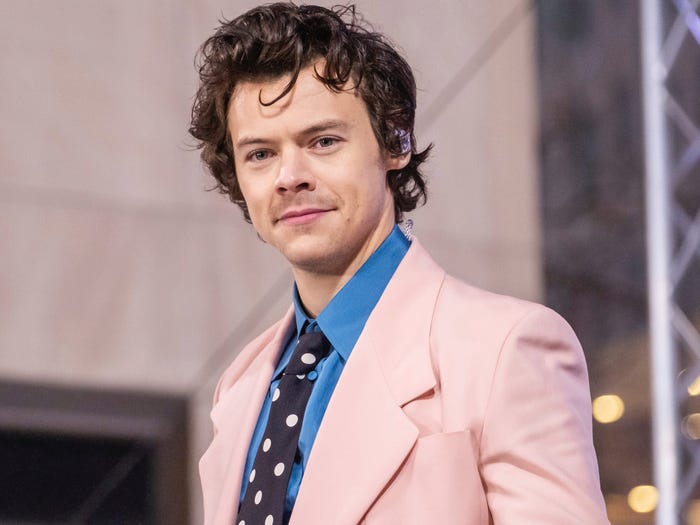 Harry Styles spoke candidly about his fluid fashion sense and not being "limited" to just men's clothing.

"You can never be overdressed. There's no such thing," the 26-year-old singer said in a new cover story for Vogue's December 2020 cover story.

"The people that I looked up to in music — Prince and David Bowie and Elvis and Freddie Mercury and Elton John — they're such showmen," he said. "As a kid it was completely mind-blowing."

For his Vogue cover, Styles wore a flowing, lace-trimmed Gucci dress and became the first man to appear solo on the magazine. His other photoshoot looks included a kilt by Comme des Garçons Homme Plus and wide-legged checked pants by Gucci.

"Now I'll put on something that feels really flamboyant, and I don't feel crazy wearing it," Styles told the magazine. "I think if you get something that you feel amazing in, it's like a superhero outfit. Clothes are there to have fun with and experiment with and play with."

The singer went on to say that "barriers" between what's considered men's and women's clothing are "crumbling away," which leads to more creative freedom.

"I'll go in shops sometimes, and I just find myself looking at the women's clothes thinking they're amazing," he said. "It's like anything — anytime you're putting barriers up in your own life, you're just limiting yourself. There's so much joy to be had in playing with clothes."

He added: "I've never really thought too much about what it means — it just becomes this extended part of creating something."

The "Watermelon Sugar" singer's sense of style has evolved since his time as a member of One Direction, the group that propelled him to fame and announced their hiatus in 2015.

Styles has become a fashion icon who takes risks with his outfit choices, whether he's performing or appearing in photoshoots. The singer's outfits can also be credited to his own stylist, Harry Lambert, and Alessandro Michele, the creative director at Gucci who he's known and collaborated with for years.

Styles wore custom-made Gucci looks throughout his 2017 solo tour, donned a marigold suit from Marc Jacobs' Spring 2020 collection (which was worn months prior by Lady Gaga) to the 2020 BRIT Awards, and accessorized with pearl necklaces at various public appearances.

He made headlines at the 2019 Met Gala, rocking a sheer black blouse with a bow (designed by Michele), wearing black heels, and adding a single pearl earring.

The "Fine Line" singer has opened up about his fashion choices in past interviews.

Speaking to The Face in 2019, he said: "What's feminine and what's masculine, what men are wearing and what women are wearing — it's like there are no lines anymore."

During an interview with The Guardian later that year, he said: "If I see a nice shirt and get told, 'But it's for ladies.' I think: 'Okaaaay? Doesn't make me want to wear it less though.' I think the moment you feel more comfortable with yourself, it all becomes a lot easier."

In the same interview, Styles also addressed his sexuality and defended his decision to not publicly label himself.

"Am I sprinkling in nuggets of sexual ambiguity to try and be more interesting? No," he said.

He continued: "And more than that, I dunno, I just think sexuality's something that's fun. Honestly? I can't say I've given it any more thought than that."