HBO’s In Treatment has seen Uzo Aduba’s Dr. Brooke Taylor help her patients process their own emotions and traumas, but in Season 4’s “Brooke Week 5,” the doctor helps herself.

Penned by Jennifer Schuur and directed by Karyn Kusama, the rebooted series’ episode is the next script in Deadline’s It Starts On the Page. The ongoing series highlights the scripts that are serving as the creative backbones of the TV awards season. The scripts are all being submitted for Emmy consideration this year and have been selected using criteria that includes critical acclaim, a range of networks and platforms, and a mix of established and lesser-known shows.

Faced with the possibility of reuniting with her son for closure, Brooke seeks out help and advice from mentor Dr. Paul Weston (Gabriel Byrne). But when it seems he’s unavailable, Brooke takes matters into her own hands and begins unpacking complicated feelings for her family, herself. One Dr. Brooke Taylor treats another Brooke, both portrayed by Aduba, and helps the later confront her own mother’s flaws and struggles with addiction. The result is an emotional breakthrough that urges real-life Brooke to sit with and process the true root of her anxieties.

In Treatment, which also features Anthony Ramos, John Benjamin Hickey and Quintessa Swindell, picks up from the original, which ran from 2008-10 and starred Gabriel Bryne and Dianne West. The series took home two Primetime Emmys in 2008 for outstanding supporting actress in a drama series and outstanding guest actor in a drama series. Byrne took home the best actor Golden Globe in 2009.

The series is produced by HBO Entertainment. Executive producers are Schuur, Joshua Allen, Stephen Levinson, Mark Wahlberg, Melissa Bernstein and Hagai Levi. Joanne Toll and Noa Tishby serve as co-executive producers. In Treatment is produced in association with Leverage, Closest to the Hole Productions and Sheleg and is based on the Israeli series Be‘Tipul created by Levi with Ori Sivan & Nir Bergman.

Read Schuur’s In Treatment script below. 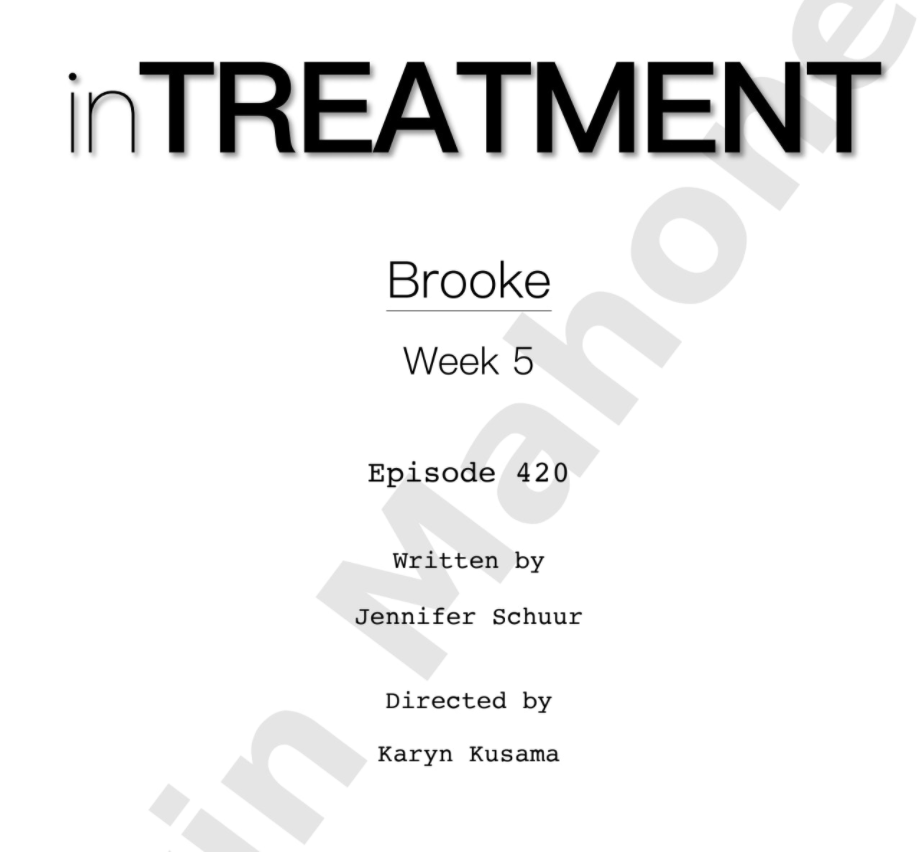 It Starts On The Page

It Starts On The Page: Read The Script For ‘Godfather Of Harlem’s Midseason Finale

It Starts On The Page: Read A Script From Season 2 Of ‘City On A Hill’ Penned By Emily Ragsdale

It Starts On The Page: Read An Operatic ‘Dickinson’ Season 2 Script By Alena Smith