Josiah Duggar & Lauren Swanson: Is This New Evidence That Their Marriage Is Over? 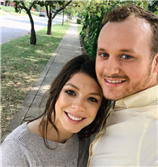 For several months now, we’ve been hearing rumors that Josiah Duggar and Lauren Swanson have broken up.

Divorce is strictly forbidden in the Duggars’ world, of course, but many are convinced that Josiah and Lauren have gone their separate ways on a trial basis, with the hope that this time apart will prove to be therapeutic.

Like, one of Jim Bob’s daughters will post a photo of herself, and fans will freak out because her husband’s not in the pic.

This time, however, there’s solid evidence which suggests that Josiah and Lauren have actually decided to go their separate wats, at least temporarily.

The speculation began when Josiah and Lauren deleted the vast majority of the photos from their joint Instagram account.

Now, they’re down to just six photos, only one of which features Lauren.

On its own, obviously, that wouldn’t be enough to jump to the conclusion that these two are experiencing problems.

But that Instagram weirdness is just one of several pieces of evidence.

Take, for example, the video that Jessa Duggar shot at her family’s annual Christmas party and posted this week.

In it, we see Josiah Duggar not wearing his wedding ring.

At first, fans believed that Lauren wasn’t even in attendance at the party, as she was not standing next to Josiah in any of the shots he was in.

(And if you know the Duggar family, you know that husbands and wives are very rarely separated, even momentarily.)

But eventually, an eagle-eyed redditor was able to slow the video down enough to catch a brief glimpse of a part of Lauren’s face.

(The video was viewed so many times without anyone sighting Lauren that the sleuth is still being praised for their detection skills. “If anything happens to me, I want you to be the detective!” one person enthused.)

The scarcity of pics and videos featuring Lauren has led some to the conclusion that she “has an agreement with the family” that she “won’t be shown on camera.”

That could be because she and Josiah are in the throes of marital strife.

Or it could be because she wishes to distance herself from her in-laws in the wake of Josh Duggar’s conviction on child pornography charges.

Of course, there are other possibilities for Lauren’s disappearance, as well.

In fact, there’s a sizable contingent of Duggar fans who are convinced that Lauren is pregnant with her second child and hoping to keep the news under wraps until after she gives birth.

This rumor began to spread in the wake of Jed Duggar and Katey Nakatsu’s gender reveal party.

Again, it wasn’t easy to find Lauren in the videos that were posted online.

But when fans located her (above), they noticed that she was wearing a baggy cardigan on what appeared to be a very warm day.

“Totally looks like a bump,” one person commented, according to UK tabloid The Sun.

“Pretty dramatic change compared to photos of her a couple months ago, so definitely could be,” a second added.

“You can see the outline of her belly and she looks pregnant. The lose-fitting sweater cannot be blamed,” a third chimed in.

So yeah, it’s possible that Lauren is keeping a low profile for reasons that have nothing to do with her marital difficulties.

Of course, a pregnancy still wouldn’t explain why Josiah hasn’t been wearing his wedding ring.

We suppose it’s possible that Lauren is pregnant and on the outs with Josiah.

We hope these two aren’t having a second kid in the hope that it’ll fix their relationship — but that does sound like a very Duggar thing to do.