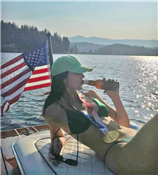 Despite a wildly successful season, Devin Booker was unable to lead the Phoenix Suns to their first NBA championship in franchise history during this year’s NBA Finals.

But just weeks after the series ended, Booker’s sorrow turned to triumph as he and the rest of the US men’s basketball team took home gold at the 2020 Olympics in Tokyo.

(They’ve been over for weeks now, and we still can’t get used to calling them the 2020 Olympics, even though they took place in 2021!)

And as thrilled as Devin might be by his achievement in Tokyo, we don’t think anyone is as ecstatic about his success as his girlfriend, Kendall Jenner.

Yes, that’s Kendall rocking Devin’s gold medal as a fashion accessory while chilin’ on a boat.

Seems like a pretty risky move, but we’re sure she was extremely careful not to drop it in the water — and she probably took it off right after the pic was snapped.

In the past, Kendall bragged about being the only member of the Kardashian clan to date a championship athlete.

Unfortunately, her claim was a bit premature, as the Suns lost to the Milwaukee Bucks in a thrilling NBA Final series.

And the boast was inaccurate in other ways, as well.

After all, Kim Kardashian was dating Reggie Bush when his New Orleans Saints won the Super Bowl.

Some have even gone so far as to suggest that Kim grabbing the mic away from Reggie during a post-game interview is the reason he broke up with her.

That’s probably not true, but it’s hilarious to contemplate.

Many have claimed they can prove through statistics that the Kar-Jenners have a demonstrably negative impact on the careers of the athletes they date.

Not surprisingly, this phenomenon has been dubbed the Kardashian Curse.

At one point it was so feared by sports fans that Cleveland residents wrote an open letter to then-Cavs star Tristan Thompson urging him to break up with Khloe Kardashian.

But as much as fans might want to believe that the Kards are responsible for their teams falling short of the championship, the theory doesn’t hold up under scrutiny.

After all, Caitlyn Jenner took home Olympic gold in 1976, and by the time she married Kris, she was one of the world’s most famous athletes.

Success in the world of sports doesn’t get much bigger than that.

These days, Kendall and Devin are enjoying a bit of downtime during his brief break between the end of the Olympics and the beginning of this year’s NBA season.

While it doesn’t look as though there’s any truth to the rumors that Kendall and Devin are engaged, insiders say they’re head over heels for one another and the relationship is progressing rapidly.

It’s too soon to say if there are wedding bells in Kendall and Devin’s future, but we’re sure these lanky youngsters are in no hurry to exchange vows.

After all, Devin just gave Kendall some bling that’s way cooler than any engagement ring!