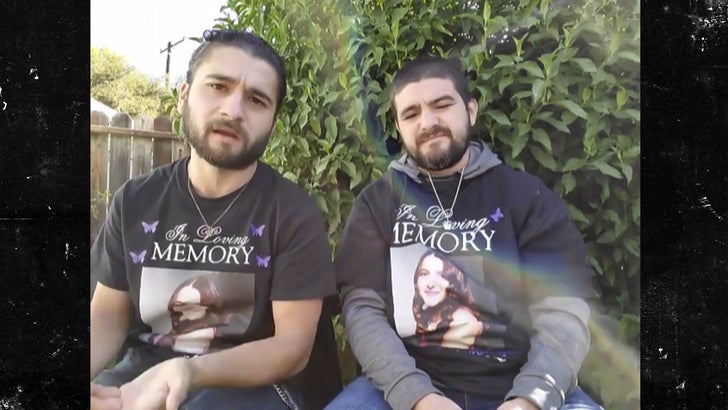 Mona Rodriguez was shot in the head by a school resource officer while fleeing the scene of a fight — unarmed, no less — and now that she’s died … her family is seeking accountability.

Oscar and Iran Rodriguez — Mona’s older brothers — came on “TMZ Live” Wednesday to discuss this tragic story that went down in Long Beach, CA. Mona had gotten into a fight, and while attempting to leave the scene in her boyfriend’s car … a campus cop who’d responded decided to open fire on them.

One of the bullets Eddie Gonzalez fired struck Mona in the head … leaving her hospitalized on life support. After doctors determined Mona was brain dead, the life support was turned off — and now the Rodriguez brothers find themselves in a nightmarish battle to get any measure of justice.

As they explained to us, they feel they’re getting the cold shoulder from Long Beach officials, including Mayor Robert Garcia, as well as L.A. County District Attorney George Gascon.

As they say, they just want answers … and more importantly, they want justice for their slain sibling, who leaves behind an infant child — now in the care of their mother.

Oscar and Iran have been outspoken since the killing, calling for the arrest of Gonzalez — who’s since been fired from his job with the school district — but to this point, all they know is Long Beach PD is investigating Mona’s death as a homicide.

The brothers made it clear they want the D.A. to charge Gonzalez with Mona’s murder.

BTW, a GoFundMe has been started for Mona’s family and baby … and they’re grateful for any help they can get.