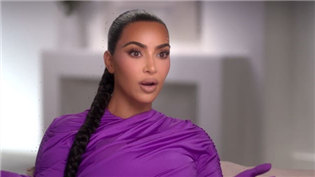 The OG Kim Kardashian sex tape came out way back in 2007, but the scandalous video has been making a lot of headlines in recent weeks.

First, there was the news that Kim was taking legal action to block the release of a second sex tape that’s reportedly still in Ray J’s possession.

That same week, The Kardashians debuted on Hulu, and viewers were shocked by a scene in which Kim expressed her fears that son Saint might come across an ad for her sex tape while playing video games.

Kim went on to state that she’s pretty sure there’s no other illicit footage out there, but she can’t be certain.

When fans pointed out that Kim was accusing Ray J of sexual assault, an “anonymoys Kardashian source” clarified that she was only joking.

For obvious reasons, many fans assumed that all of this renewed sex tape controversy was manufactured as a means of promoting the Kards’ Hulu show.

But as the family learned the hard way this week, you can’t just turn controversy off like a faucet when it no longer suits you.

The Kardashians appeared in court this week as jury selection got underway for their upcoming trial against Rob Kardashian’s baby mama, Blac Chyna.

Blac is suing the entire family for defamation and interference with prospective economic relations stemming from her messy breakup with Rob.

Chyns filed suit for $40 million for loss of earning damages and more than $60 million in loss of future earning capacity damages.

It’s anyone’s guess how the case will turn out, but one thing is certain — the Kards were dealt a major L during the first day of jury selection.

When Kardashian attorney Michael Rhodes asked a group of potential jurors if they have any prejudices against reality TV stars, one man replied that he has a strange beef against Kim in particular.

“I have watched [Kim] Kardashian’s sex tape, and I don’t think I can be impartial on this case,” the potential juror remarked.

Another man stated that he just doesn’t dig reality TV, and he wishes the Kardashians show “wasn’t on any longer.”

(Clearly, this man doesn’t pay enough to attention to the world of reality stars! The Kardashians on Hulu is a totally new show! It just happens to look just like the last one!)

According to Page Six, the sex tape remark was met with “a roar of laughter from the other potential jurors,” but the Kardashians were visibly peeved.

The outlet reports that Khloe was “visibly annoyed,” and Kris shook her head in disgust after the man explained that he would be “replaying that sex tape over and over again” during the trial if he was selected as a juror.

Kourtney reportedly began fixing Kim’s hair as though to comfort her sister, who apparently maintained a steely expression throughout the juror’s asinine bullying.

We guess the good news is that this fool was weeded out before the trial.

But the bad news is that mother of four Kim is still forced to deal with this sort of nonsense 15 years later.