Mick Jagger seen with his bandmates after bombshell claims

Mick Jagger, 79, is seen for first time with Rolling Stones bandmate Keith Richards, 78, since bombshell claim was made that the two have been intimate

Mick Jagger, 79, was seen exiting a music studio in New York City on Thursday.  Also with the Wild Horses singer were his band mates Keith Richards, 78, and Ronnie Wood, 75.

It was also claimed that Jagger had been close to Mick Taylor.

Jagger, Richards and Wood all looked exhausted as they were dressed down in casual clothing. 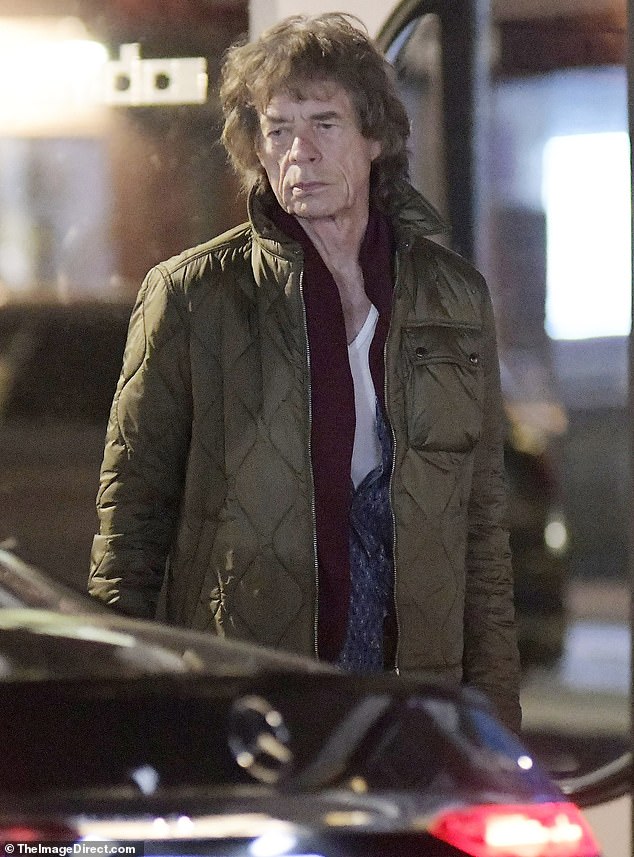 Bombshell sighting: Mick Jagger, 79, was seen exiting a music studio with his bandmates in New York City on Thursday. The legendary rock star looked stressed and exhausted amid bombshell claims that he had a sexual relationship with two members of The Rolling Stones

The Rock and Roll Icon and his legendary bandmates all looked tired as they left the studio.

Each one of them dressed in a variation of a casual jacket, shirt and pants.

Branded as a ‘bisexual icon’ by writer Lesley-Ann Jones in her new book The Stone Age: Sixty Years of the Rolling Stones, the alleged affairs took place in the band’s early days.

And they reportedly involved Mick having an intimate relationship with Richards in addition to Mick Taylor, a former guitarist for The Rolling Stones from 1969 to 1974. 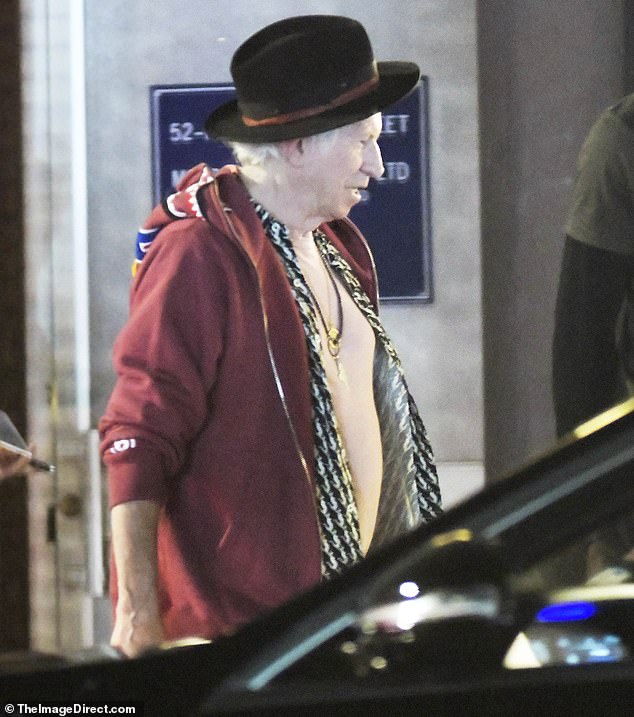 Former lover? Keith Richards, 78, was seen leaving the music studio with Jagger, who is alleged to have been his former lover in the early days of The Rolling Stones. The shocking allegations were made by the writer Lesley-Ann Jones in her new book The Stone Age: Sixty Years of the Rolling Stones

Anita Pallenberg – the band’s former muse and longtime partner of Richards – is quoted in the book.

She explicitly referenced the secret connection between Jagger and Richards before her death in 2017. ‘From when I first met them,’ claimed Pallenberg, ‘I saw Mick was in love with Keith.’

English singer Marianne Faithful – who had a relationship with Jagger from 1966 to 1970 – echoes Pallenberg’s assessment of the sexual tension between Mick and Keith. ‘I had an inkling that there was a sexual undercurrent between them,’ she is quoted in the book. ‘I knew in some part of my head that Mick was bisexual.’

Known for his voracious sexual history with some of the world’s most beautiful women, the iconic rock star has been in a relationship with ballerina Melanie Hamrick, 35, since 2014. The couple had a son in 2016, making Sir Mick the father of eight.

Richards and Taylor are listed in the book’s lengthy appendix that serves as a record of the many lovers taken by The Rolling Stones since the band was formed in 1962. In addition to the alleged flings between Jagger and his bandmates, the book also includes the long-running allegation that Mick had a tryst with David Bowie in addition to a fling with the Austrian actor Helmut Berger. 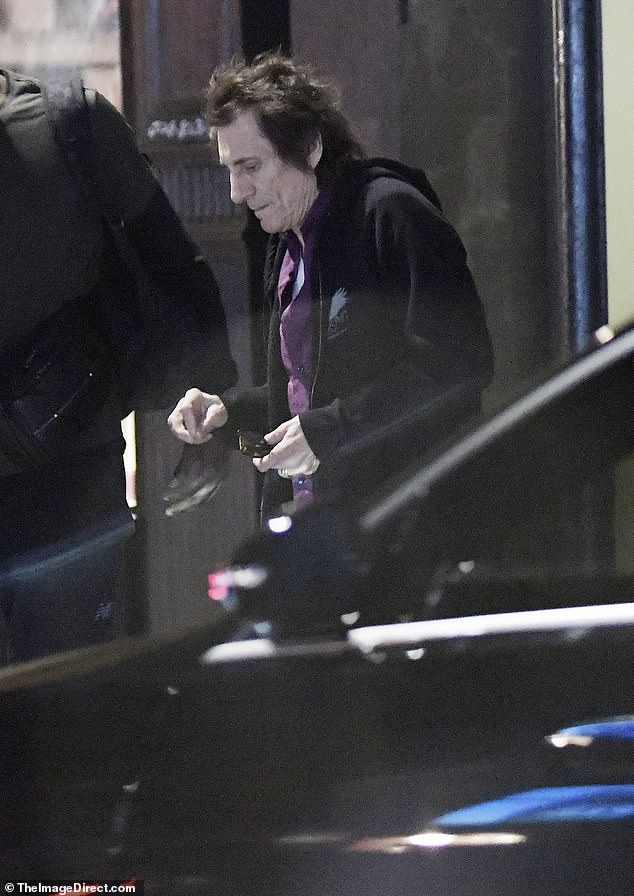 Haggard: Ronnie Wood, 75, looked pale and tired as he exited the music studio with Jagger and Richards. The guitarist was not alleged to have had an affair with Jagger in the past as his name does not appear in the book’s infamous appendix that serves as a lengthy record of the many lovers taken by The Rolling Stones since the band was formed in 1962

‘Of all Mick’s relationships,’ Marianne Faithful, 75, has said in the past, ‘the only one that really means anything to him is with Keith.’ Rumors of Mick and Keith’s alleged romance have abounded for years and they have been made public before in 2012 by the writer Christopher Andersen.

Andersen wrote in his book Mick: The Wild Life and Mad Genius of Jagger that members of the band caught Mick and Keith ‘dozing in bed together.’ The legendary pair have not always been close, enduring many rifts over the years. Richards was rumored to have caused a fight with Jagger by saying in 2010 that Mick had a ‘tiny todger.’

Richards made the insult in his best-selling autobiography simply titled Life, but it didn’t take him long to regret the remark and the pair have since patched up their relationship. ‘Mick and I live off the fire between us,’ Richards told the Wall Street Journal in 2018. ‘We were made for each other. It’s like putting on an old glove, man, you know.’ Spokespeople for Jagger, Richards and Taylor have not responded to requests for comment. 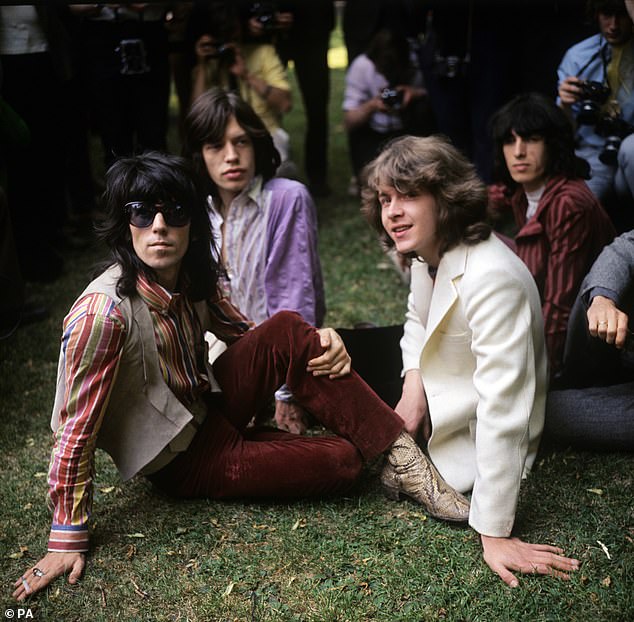 Before the bombshell: The Rolling Stones pictured in Hyde Park, London back in 1969. Mick Taylor (white jacket) was the other bandmate in addition to Keith Richards (left, dark glasses) that allegedly had an affair with Mick Jagger (back left) in the band’s early days. Former bassist Bill Wyman (back right) has not been included in the rumors