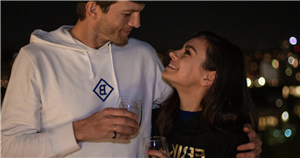 Mila Kunis and Ashton Kutcher, who could afford to bathe in the finest of asses’ milk every day of the year if they so wished, have confessed they prefer to let their two kids play dirty.

In a frank and revealing interview on the Armchair Expert podcast, the multi-millionaire acting couple said they only bathed Wyatt, six, and Dimitri, four, when "you can see the dirt on them".

They then confessed they also don't like using soap much in their own hygiene routines either.

Ashton, 43, once married to Demi Moore, said he only soaps up his “armpits and crotch” while Mila, 37, was a little more explicit saying she prefers to regularly wash just the essentials like her “slits and t**s.”

The Bad Moms actress, who was born in Soviet Ukraine into an early life of hardship and grinding poverty, said she hardly ever washed during her childhood because they didn't have hot water at home.

“I didn't have hot water growing up as a child, so I didn't shower much anyway,” said Mila, who once dated former child star Macaulay Culkin.

"But when I had kids I also didn’t wash them every day.

"I wasn't that parent that bathed my newborns, ever.”

Her husband of six years, Ashton, who she first met on the set of That 70s Show as a teenager, wholeheartedly agreed.

"If you can see the dirt on them, clean them. Otherwise, there's no point,” he said.

The star then admitted he only ever washed his own "armpits and my crotch daily and nothing else ever.”

However, the couple – who tied the knot in 2015 after a very long friendship – revealed they do like to wash their faces after getting hot and sweaty at the gym.

At this highly sensitive time in the pandemic, where regular washing of the hands and bodily hygiene is considered vital in the fight against COVID-19, the couple’s revelations have landed them in a right lather with many criticising their laidback methods.

Although the UK’s National Childbirth Trust (NCT) website states that babies don’t need a bath every day and that the “top and tail” method can be done effectively every day or every few days or, even, as needed.

Ashton and Mila first became good friends while working on the series That 70s Show together in 1998.

But it wasn't until they became an item years later following Kutcher's divorce from Demi Moore in 2013.

For all your updates on Mila Kunis and Ashton Kutcher, sign up to our daily OK! newsletter.