Newly-single Shakira smiles as she goes surfing with handsome pal

PICTURE EXCLUSIVE: Newly-single Shakira cracks a smile as she goes surfing with handsome pal in Spain – following her shock split from footballer Gerard Pique after 11 years

Shakira was all smiles on Tuesday as she went surfing in Spain with a handsome pal and her son Milan, following her shock split from footballer Gerard Pique after 11 years.

The Colombian singer, 45, showed off her incredible figure in a black and red wetsuit while her lengthy locks were styled in wet waves.

The star flaunted her natural beauty as she went make-up free for the water activity and was spotted showing off her surfing talents. 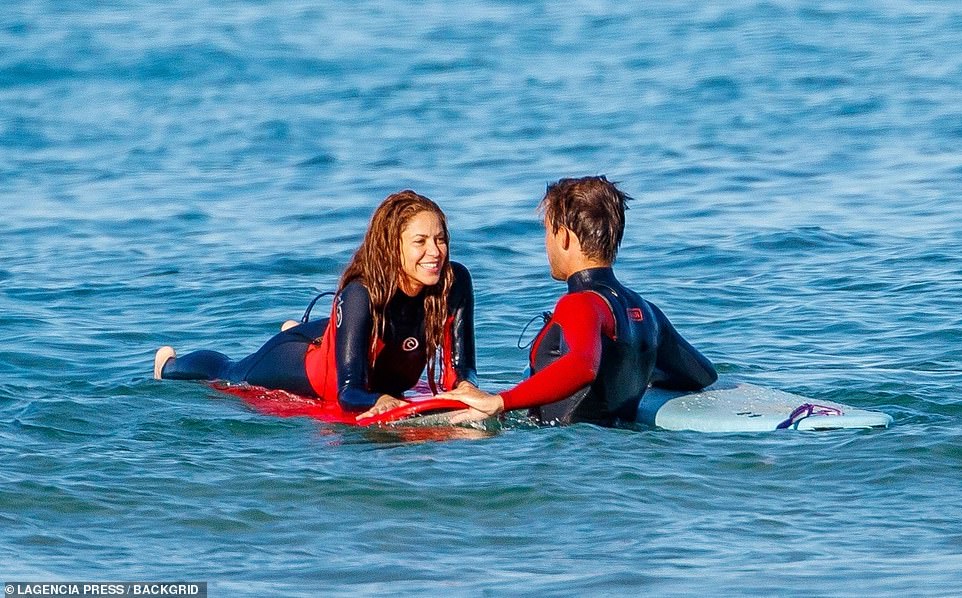 Got her smile back: Shakira was all smiles on Tuesday as she went surfing in Spain with a handsome pal and her son Milan, following her shock split from footballer Gerard Pique after 11 years

Shakira couldn’t help but smile while she sat on her surfboard and chatted with friends and a hunky mystery man between surfing the waves.

The outing comes after the Whenever, Wherever artist split with Gerard Piqué, 35, as they revealed they separated last week.

The former pair – who are parents to sons Milan, nine, and Sasha, seven – released a joint statement in which they said: ‘We regret to confirm that we are separating.

‘We ask for privacy at this moment for the well-being of our children, who are our maximum priority. Thank you in advance for your understanding and respect.’ 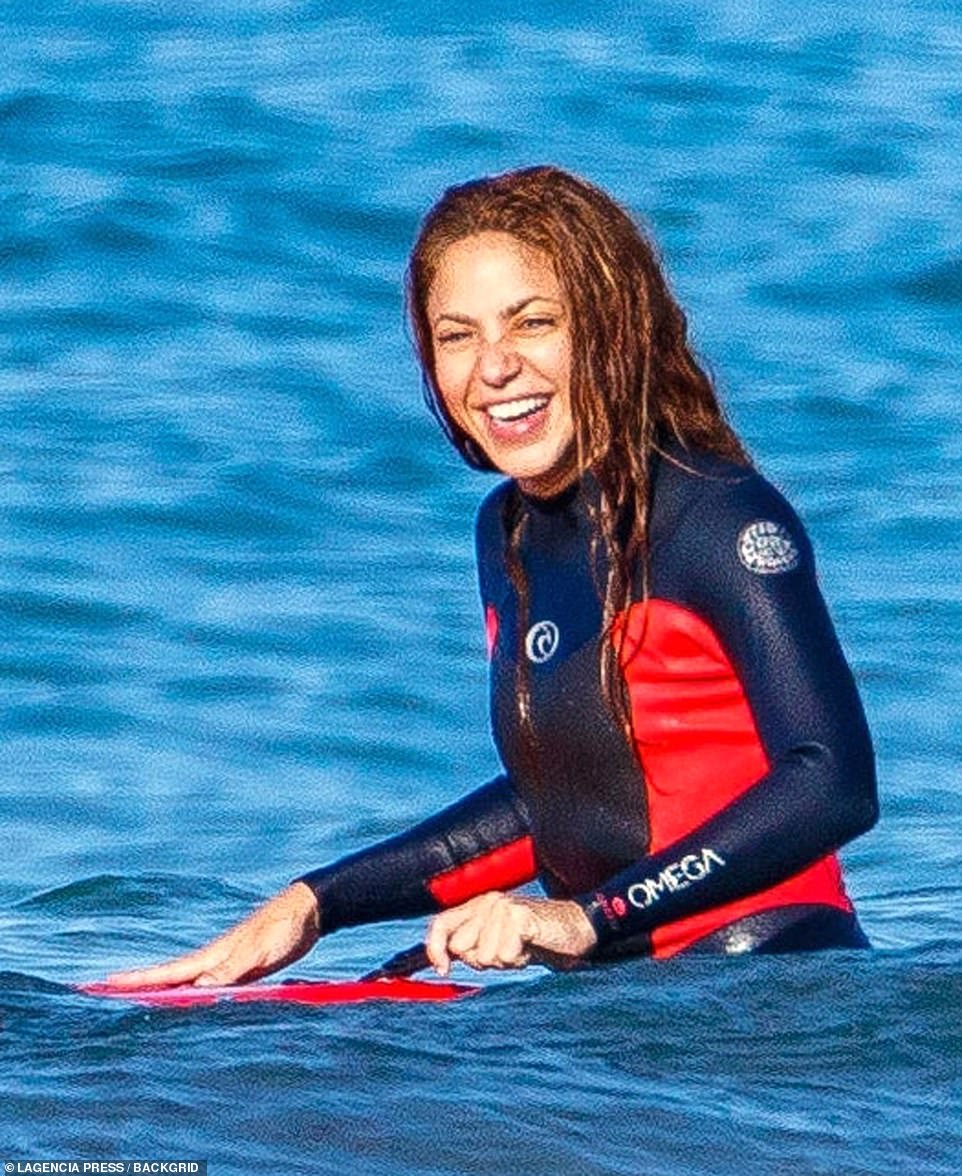 Happy: The star flaunted her natural beauty as she went make-up free for the water activity and was spotted showing off her surfing talents 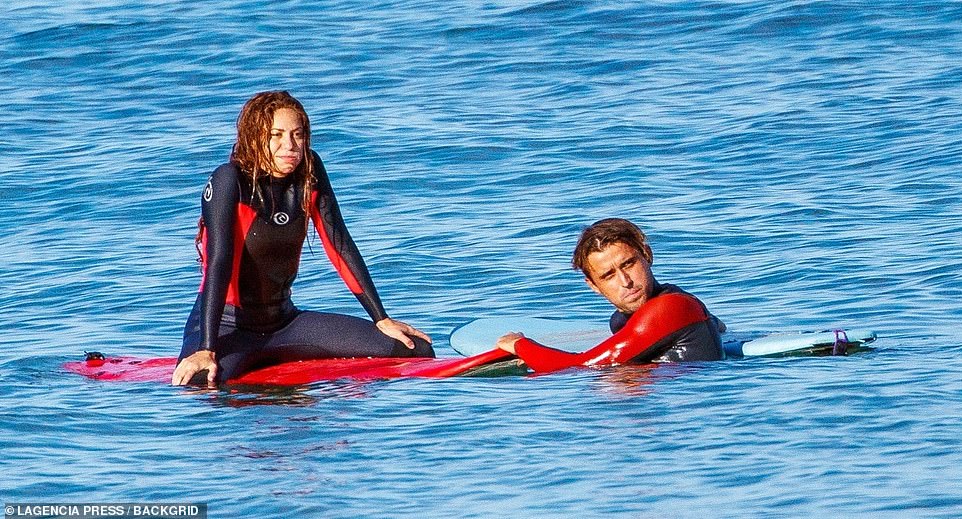 Who’s that: The star was seen enjoying the sun and sea as she relaxed on a day off 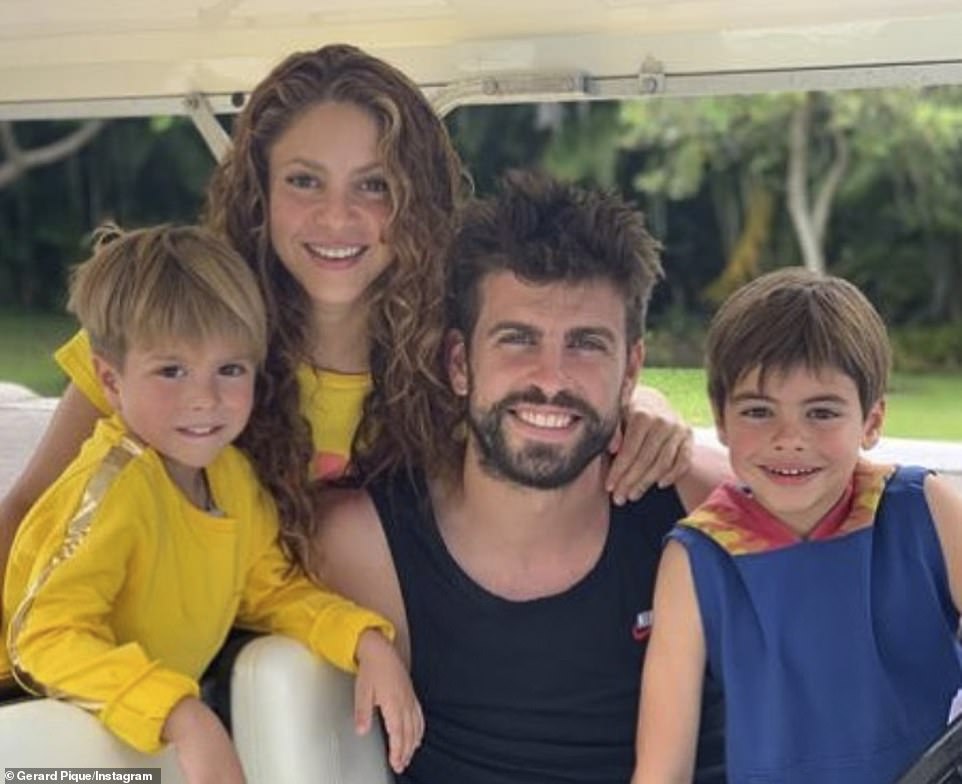 It’s over! Shakira and her partner Gerard  announced their separation earlier this month (pictured with their children Milan, nine, and Sasha, seven) 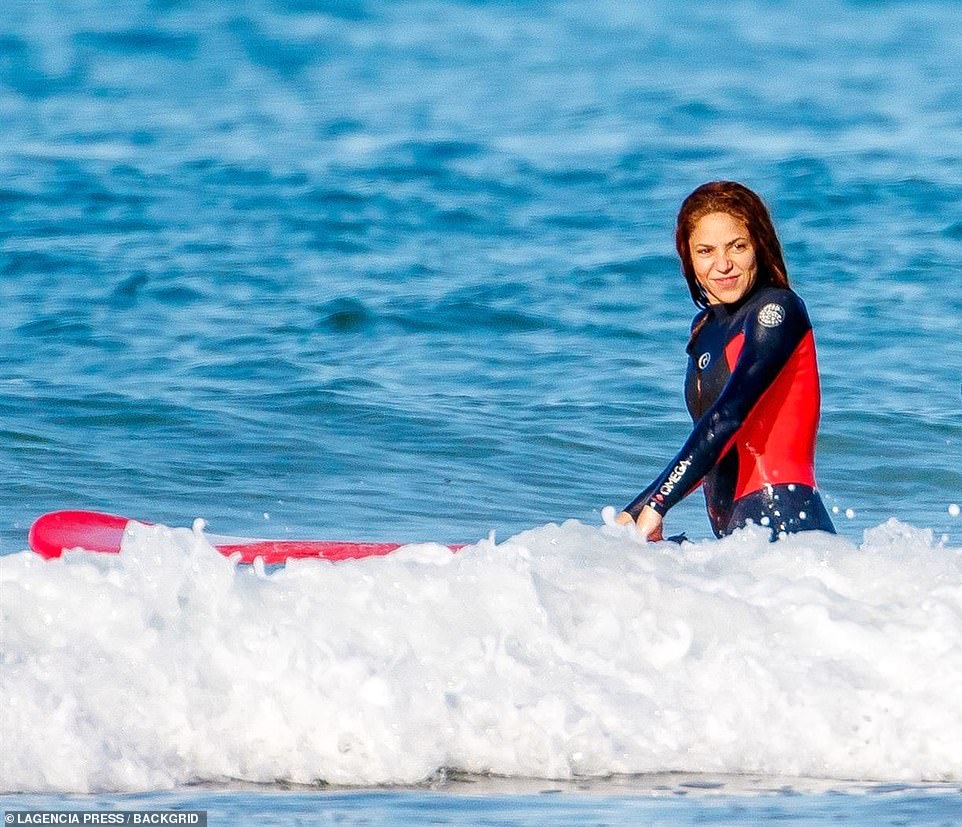 Looking good: The Colombian singer, 45, showed off her incredible figure in a black and red wetsuit while her lengthy locks were styled in wet waves 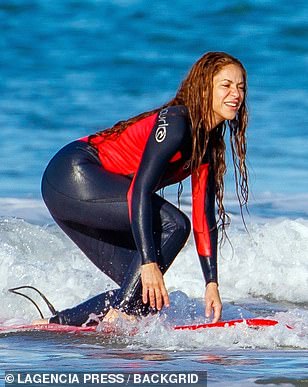 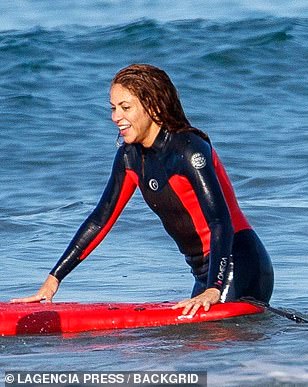 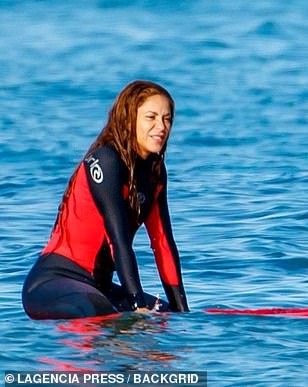 Go for it: Shakira couldn’t help but smile while she sat on her surfboard and chatted with friends and a hunky mystery man between surfing the waves 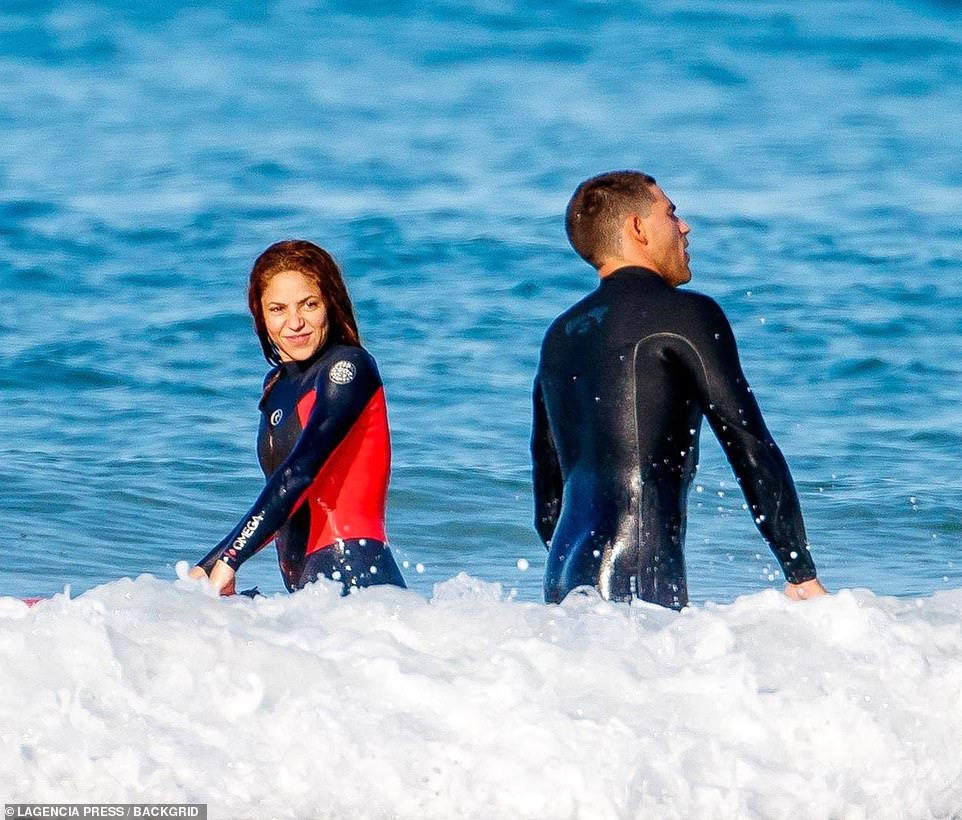 Good spirits: The star looked sensational as she soaked up the surf in Spain

The Grammy winner and the athlete initially emerged publicly as a couple in 2011.

The announcement comes amid rumors in the Spanish tabloids that the couple were on the verge of breaking up with sources claiming he had cheated on the star.

Spanish outlet El Periodico reported that the couple have been living separately for a few weeks after Piqué was kicked out of the family home by the pop star.

According to sources, Piqué has since been living a ‘party lifestyle’ in a bachelor pad and enjoying nights out with his teammates. 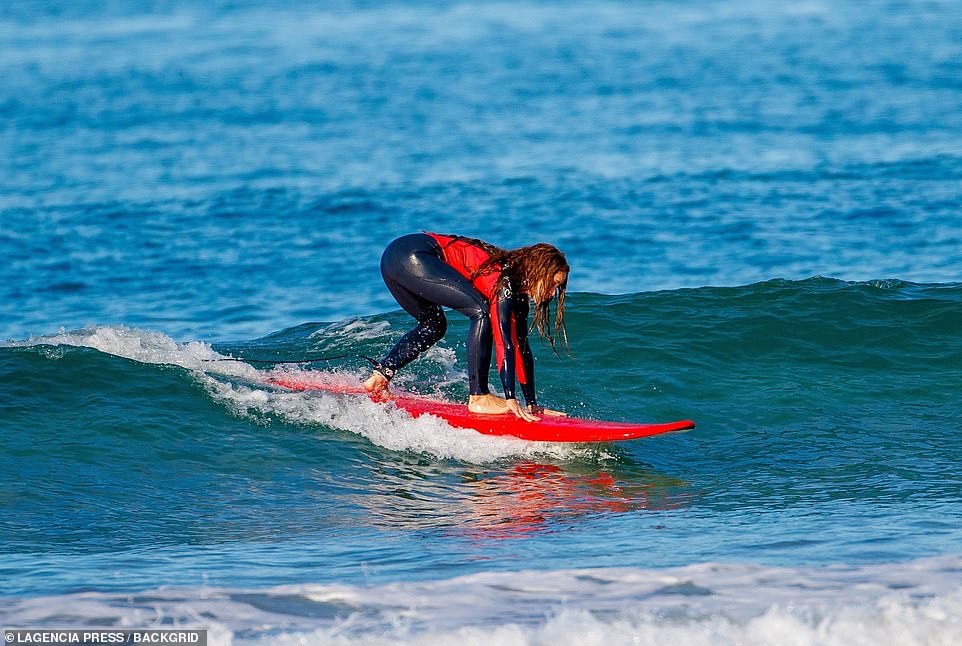 Making a splash: Shakira looked every inch the surfing pro as she hit the waves 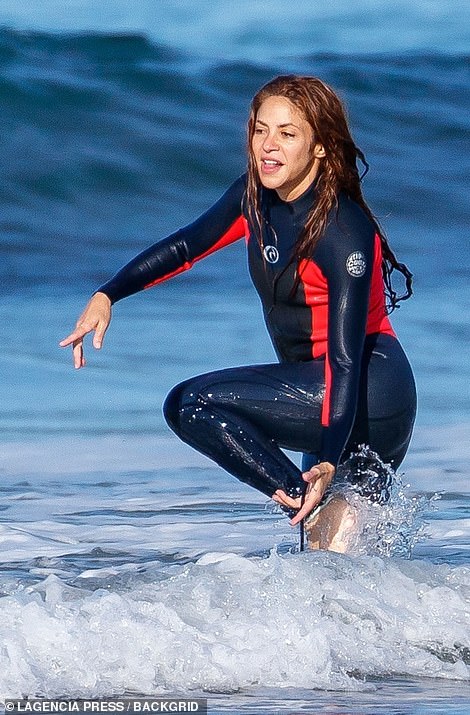 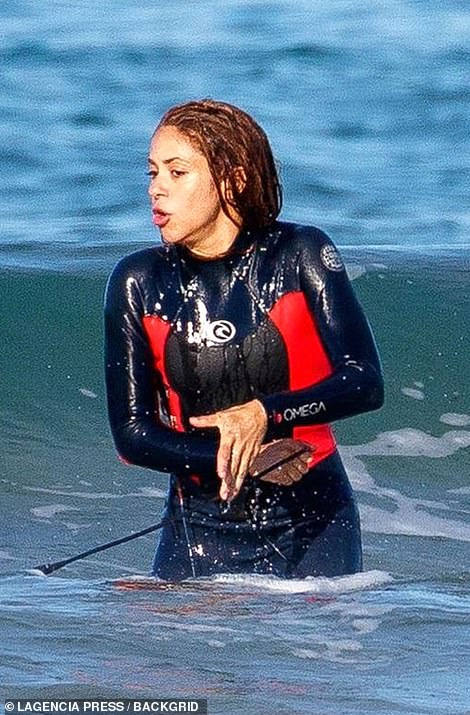 Whenever, Wherever! The star was making the most of her time off from her busy career 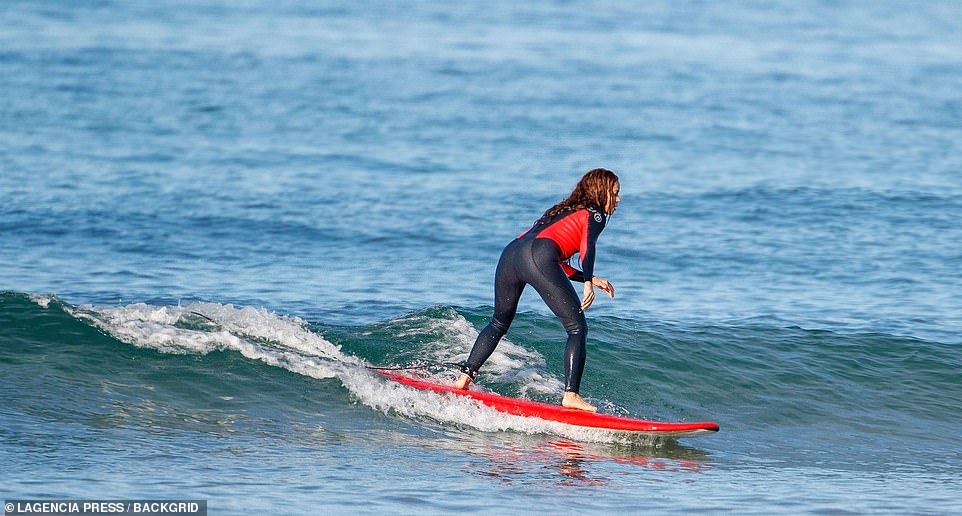 Wow: The star showed off her surfing prowess as she hit the waves 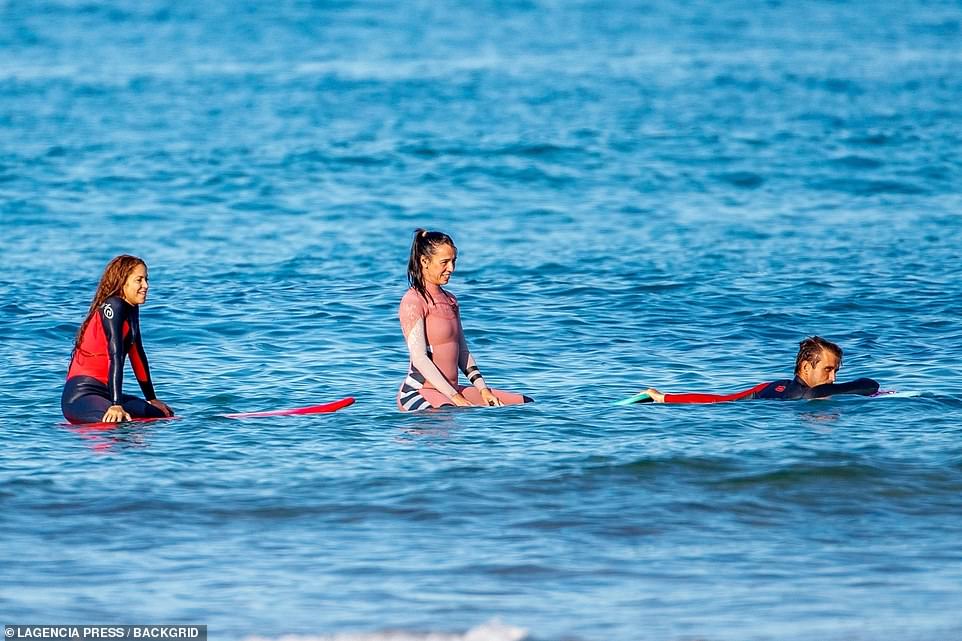 Scenic: Shakira took in the sights as she relaxed at sea with pals

Fun: The star was joined by son Milan and pals as she soaked up the sun 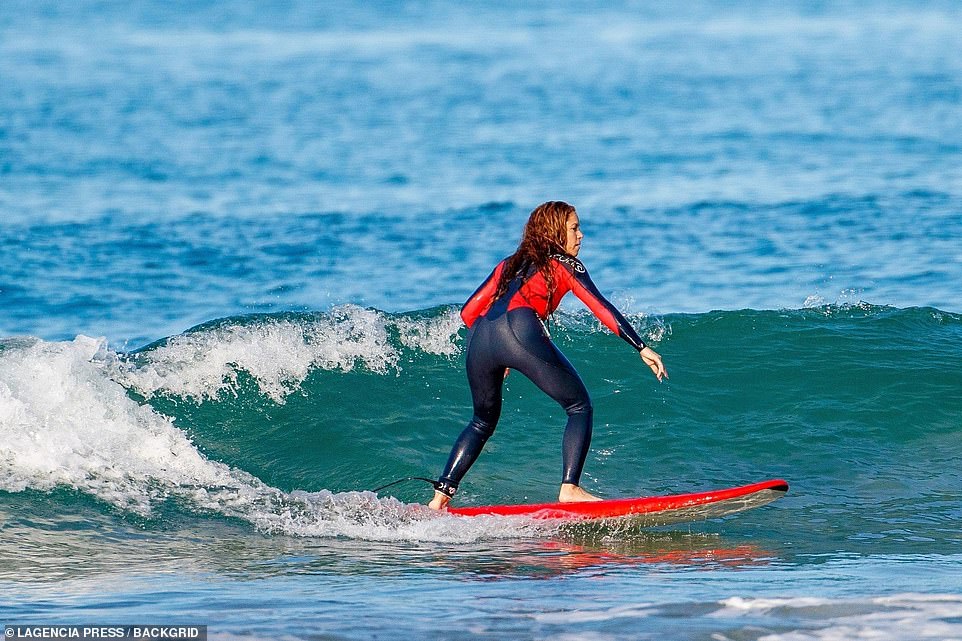 Wow: The songstress showed off her athletic frame as she zipped through the waves

Neither party has addressed cheating claims but journalist Emilio Pérez reported: ‘(Shakira) has made the decision to separate. That is so. It has happened.

‘That is why there is distance. Perhaps there is nothing left, but that (infidelity) has passed.’

Representatives did not respond when contacted by MailOnline for comment.

The former power couple were hit by split claims in 2017, with it being claimed that the two were no longer living together and Shakira had instigated the split.

It followed weeks of speculation about the pair’s relationship status in the Colombian press, with a source claiming she ‘could no longer cope with the situation.’ 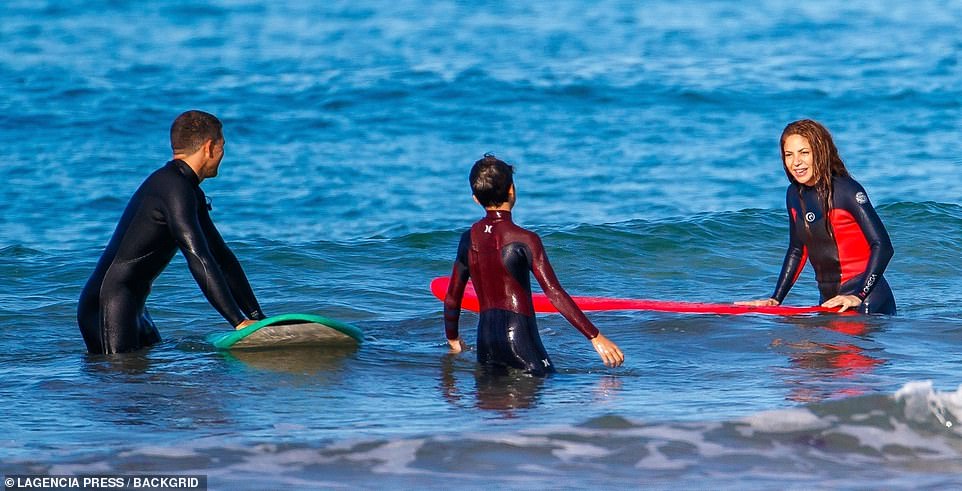 Quality time: The mother and son looked in great spirits as they relaxed 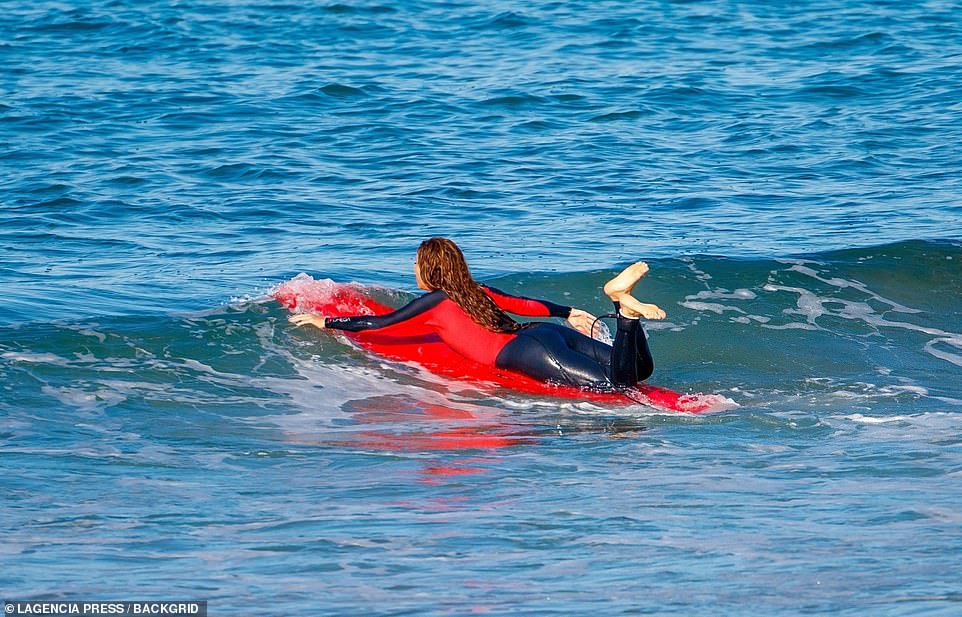 Swim: Shakira was seen paddling out as she went to catch another wave

‘It’s something serious and she has been the one who has finally made the decision,’ they told Spanish website Cotilleo.

The She Wolf songstress hinted at disharmony between the pair in her latest hit Te Felicito with Rauw Alejandro, in which she sings: ‘To complete you I broke into pieces; I was warned, but I didn’t listen; I realized that yours is false…

‘It was the drop that overflowed the glass; Don’t tell me you’re sorry, that sounds sincere, but I know you well and I know you’re lying.’

The couple had been together since 2011, with the pair having met while filming the music video for her World Cup song Waka Waka the previous year. 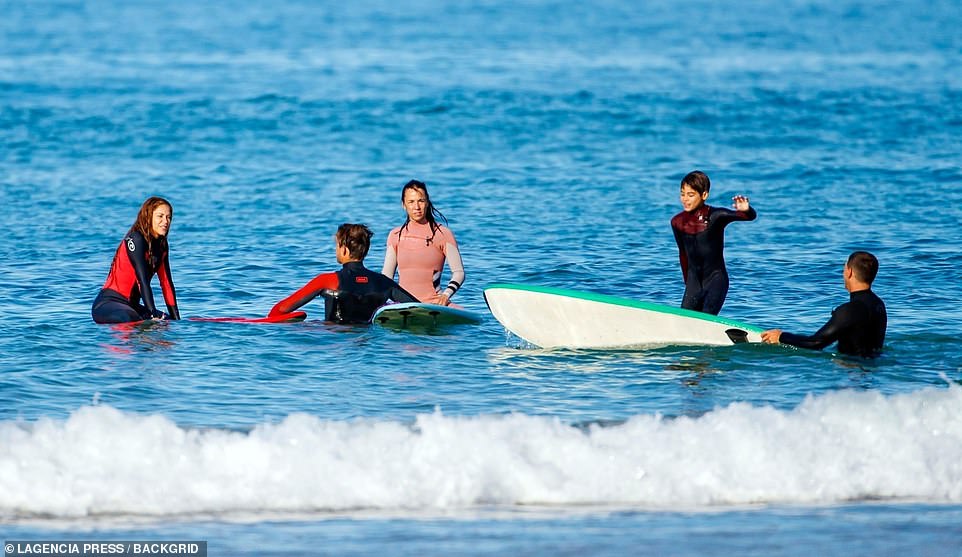 Chat: Shakira was seen chatting to pals as she prepared to hit the waves 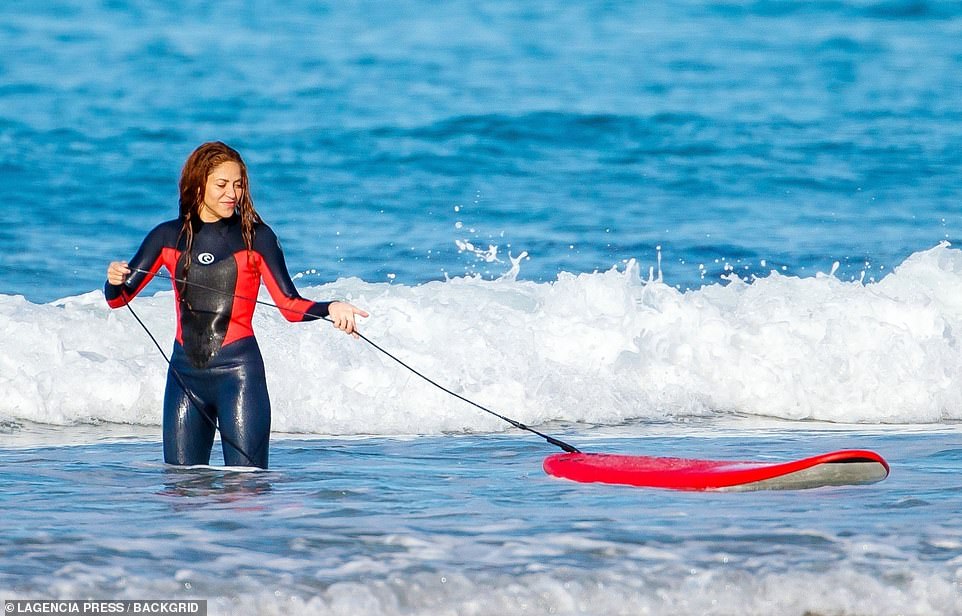 Smile: Shakira showed off her toned frame as she relaxed at sea 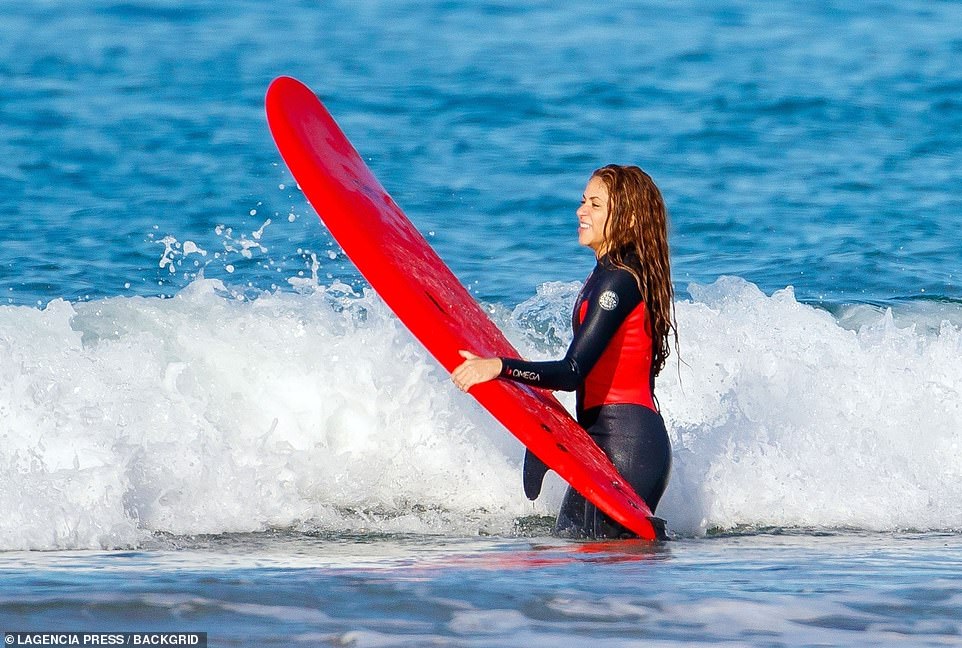 Relaxed: She held onto her surfboard as the waves crashed around her 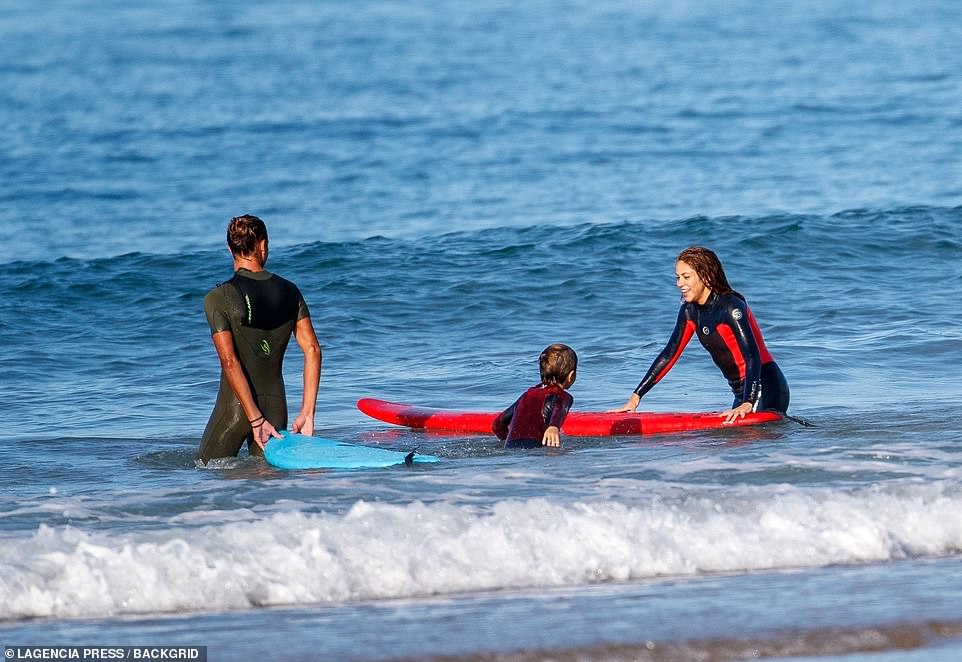 Fun times: Shakira looked relaxed as she chatted to her son at sea 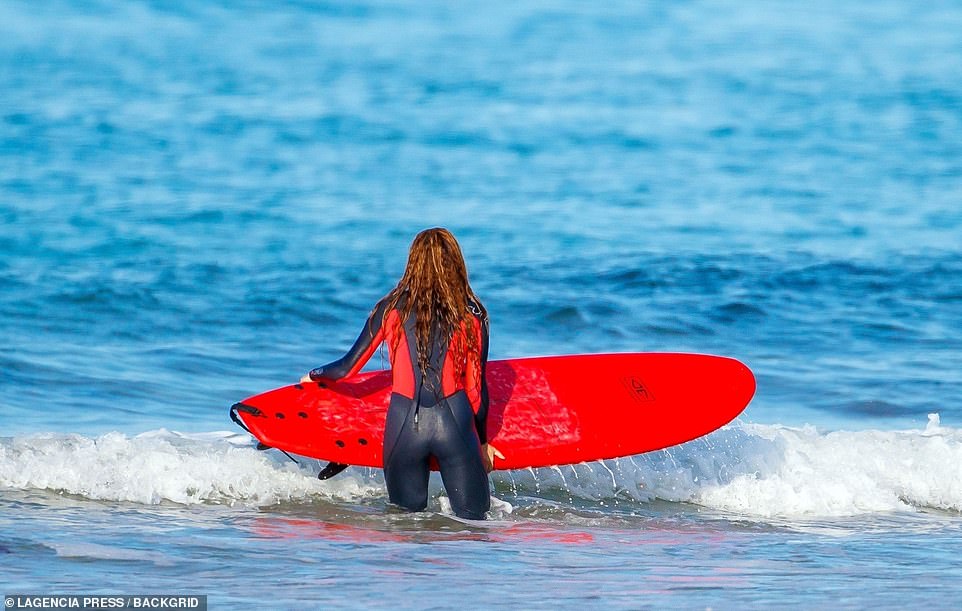 Sights: The star took in the stunning surroundings as she prepared to surf

Piqué’s team happened to win the World Cup that year, where his soon-to-be girlfriend performed during the final game.

Though the two corresponded in 2010, the relationship between the two mega-stars wouldn’t officially take off until the start of 2011.

In the fall of 2012, Shakira would use her Instagram platform to announce to fans that she was pregnant with the football star’s son.

Just two years after the birth of son Milan, the couple revealed they would be expecting their second child, Sasha, who was born in 2015.

The couple have admitted publicly that they have no plans to wed, but that hasn’t stopped them from having a family life.

Splash: Shakira looked in good spirits in the wake of her split 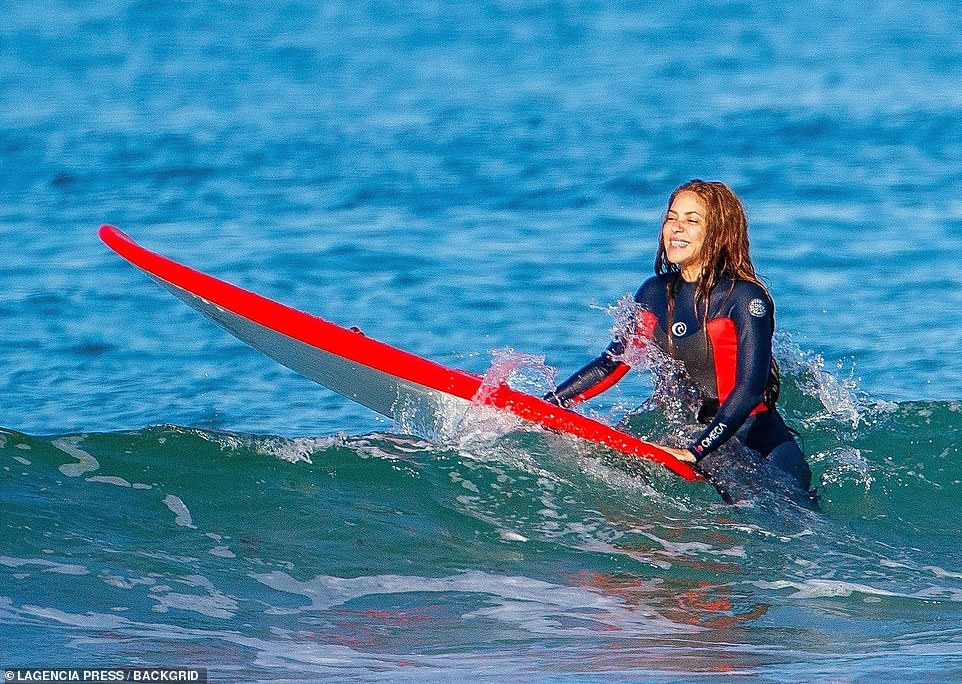 Yay: Shakira smiled as she negotiated the waves during her day out 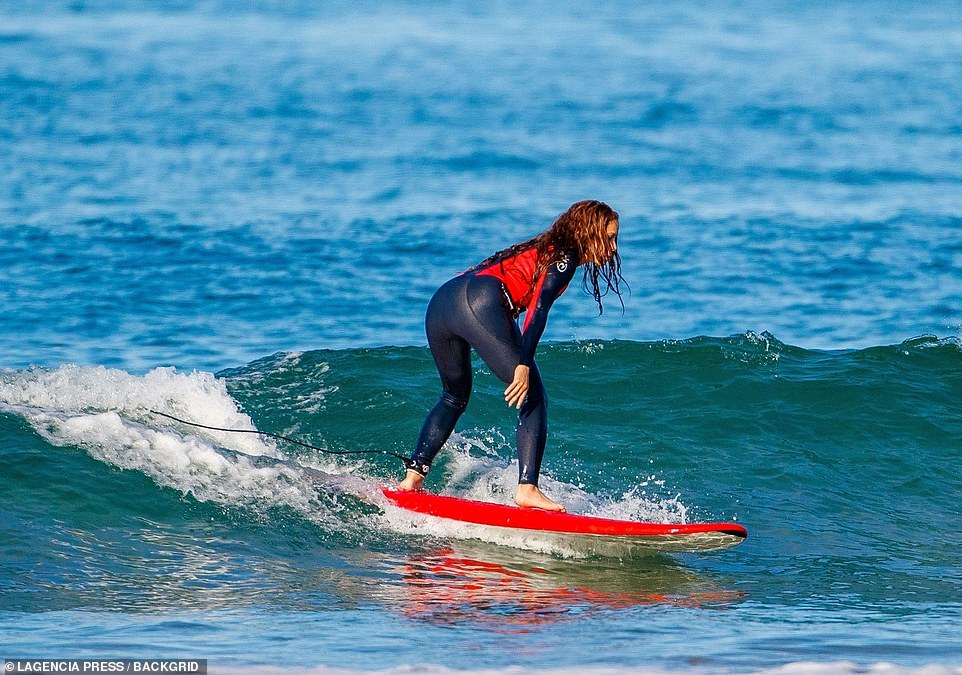 Prowess: The star looked incredible as she took to her surfboard 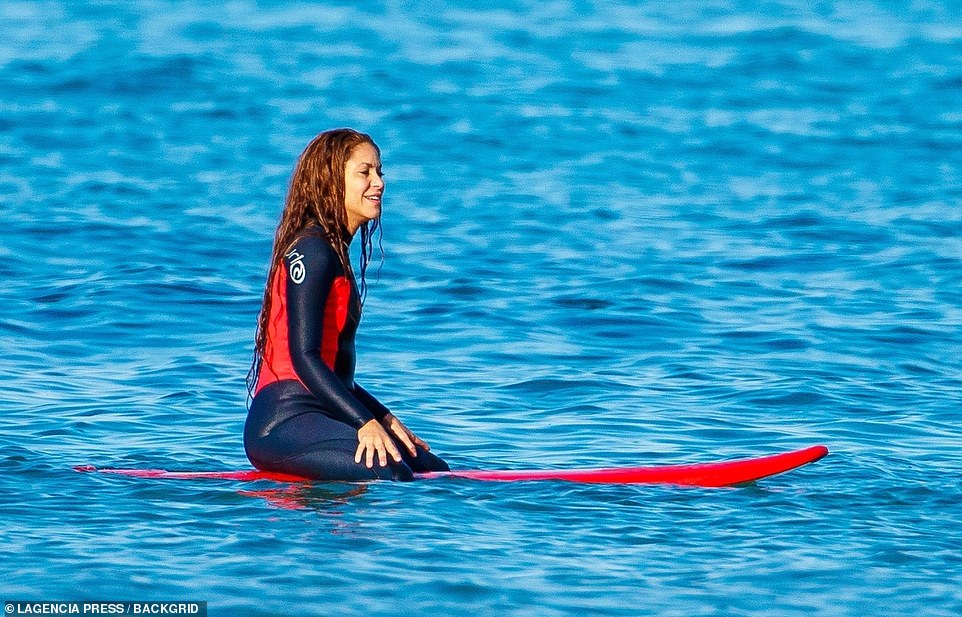 Radiant: The star looked beautiful as she took in the sights of Spain 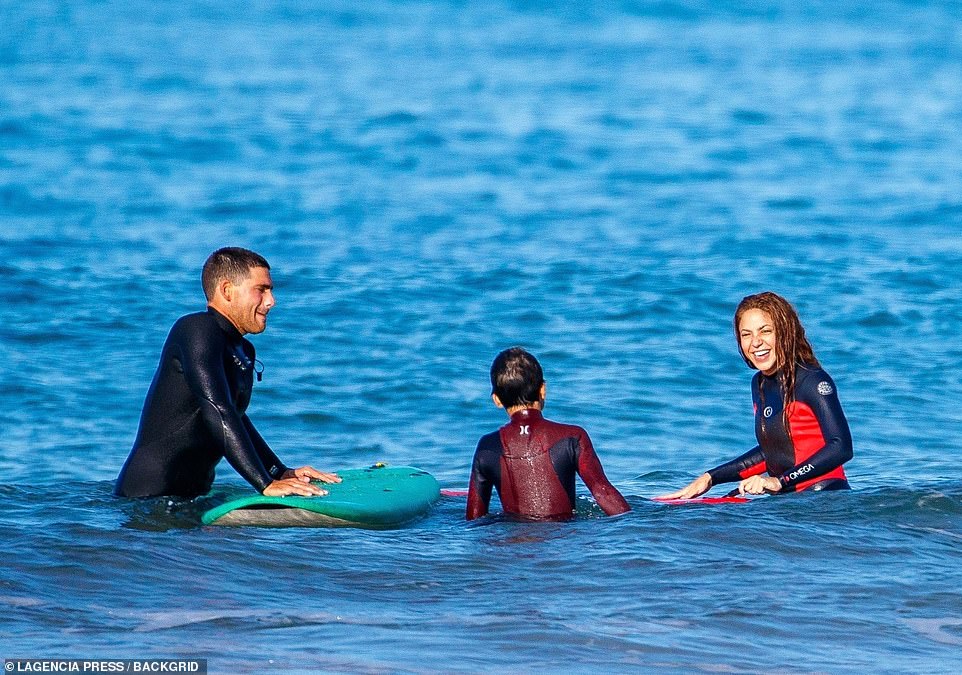 Chat: Shakira looked happy as she chatted with her son 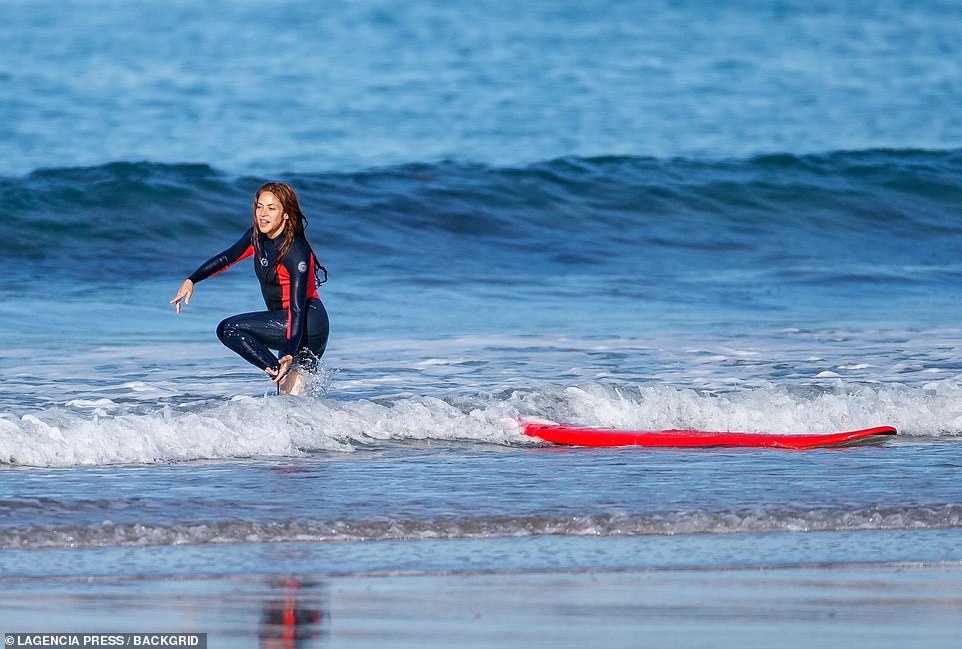 Paddle: Shakira made it safely back to shore after a fun day

Speaking to Gary Neville on a recent episode of The Overlap, the Spain international explained that he hadn’t proposed because their relationship ‘works fine as it is.’

‘I like it how we are right now. We have two kids, nine and seven, we work good as a couple. We don’t have the need to be married, it’s fine,’ said Piqué.

After Gerard made his 600th appearance for Barcelona in March, Shakira marked the landmark with a heartfelt post on social media.

Back in March, the Barcelona FC defender risked the wrath of his partner by claiming that playing against Espanyol was better than sex.

He said on The Wild Project with YouTuber Jordi Wild: ‘I’m happy that Espanyol has been promoted to the first division because that’s how we play in their stadium. 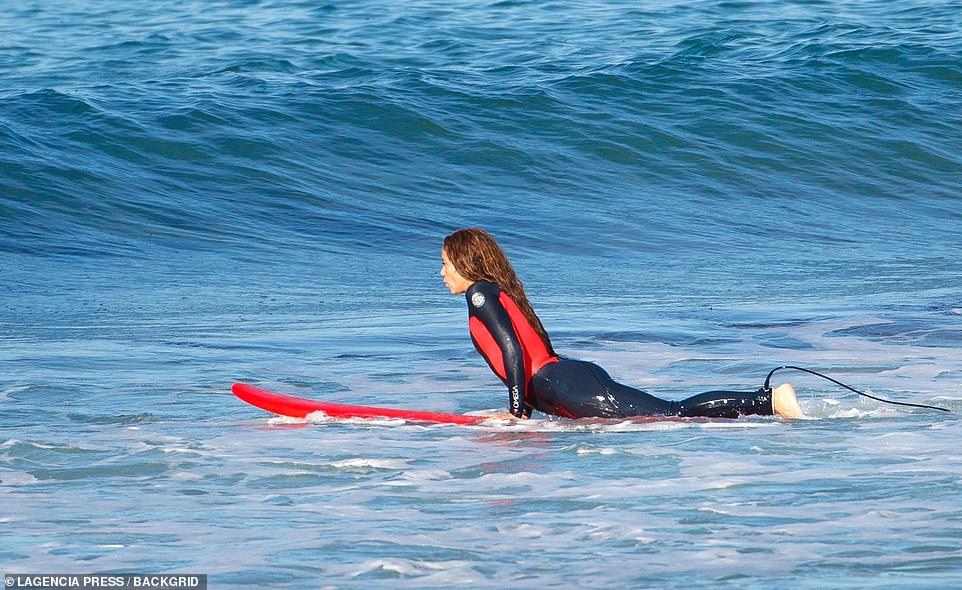 Waves: The star looked on a large wave approached her

‘I like to go there, I get whistled at all the time. You laugh and the fans get even madder.

‘There is nothing comparable in the world. I would say it’s better than sex. I enjoy it a lot more than playing against Real Madrid.’

The Hips Don’t Lie singer previously praised her boyfriend on his parenting style, claiming he’s her ‘biggest support’ when it comes to raising their children.

She said: ‘He’s got his feet on the ground and is very practical about problem-solving. When I get stressed about how to organize things or juggle it all, he helps put it all in perspective.

‘And he is my biggest support. We’re both very hands-on parents, so it never feels like one is carrying the entire load on their own. He probably lets them have a little more chocolate than I’d like, though.’ 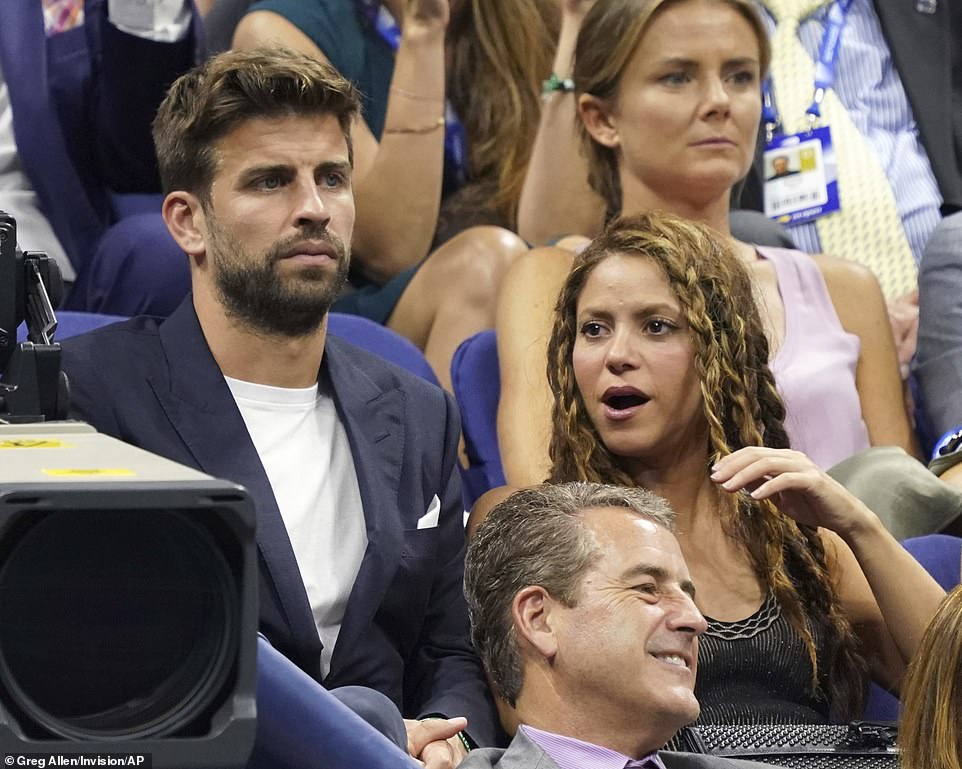 Shock: Back in March, the Barcelona FC defender risked the wrath of Shakira by claiming that playing against Espanyol was better than sex (pictured in 2019)