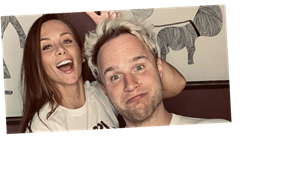 Want the most up-to-date celebrity exclusives sent straight to your inbox every day? Sign up now and join the club!

Olly Murs has celebrated his one year anniversary of living with his girlfriend Amelia Tank, 29, with a montage of their favourite times together over the past 12 months.

Alongside the fun video, he wrote: “Been a whole year living with this one. wow we’ve had some fun. When I look back in years to come, I won’t remember the negatives over this time. Only that I found this positively wonderful human being xx.”

Fans of the star were quick to encourage Olly to make things a little more official and pop the question.

One fan wrote: “her ring finger is looking rather empty, Murs!”

Get exclusive celebrity stories and fabulous photoshoots straight to your inbox with OK's daily newsletter. You can sign up for FREE at the top of the page.

Olly, 36, has been busy posting lots of videos of his antics at home with Amelia over the last year. The pair are fond of playing pranks on each other and posting the hilarious results to make fans giggle.

Last month, Olly posted a glowing tribute to his love on her birthday. Posting photos of an extremely romantic looking meal, Olly wrote: “29 and she’s all mine HBD to this absolute rocket how she puts up with me I'll never know xx.

"Her birthday dinner sorted with @thelittleglampingcompany thanks you legends, food was insane @thefinediningchef thanks so much she loved it and so did our bellies.”

To celebrate her birthday, the former X Factor star, 36, surprised his love with an igloo in the garden.

The temporary structure had plastic walls and was decorated to the nines.

The floor was covered in luxurious carpet, and there were white flowers and foliage hanging from the ceiling.

In the corner of the space was a very romantic table set for two, with a laced cotton cloth on top, as well as champagne glasses and more flowers.

The two chairs were covered in faux fur throws, which looked fantastic.

The happy couple posed for a sweet photograph in front of the igloo which was decorated in cascading pink balloons, as well as outdoor lanterns.

Olly and bodybuilder Amelia have been dating since 2019.

Speaking on Good Morning Britain, the star confirmed they met at the same gym. "We we're just friends, then we started dating, then it fizzled out," he said.

However, after he had an operation on his knee the star said: "We got in contact again and it was just nice."

He confirmed his relationship with her on New Year’s Day 2020 with a snap of the two on holiday in front of a quad bike.

He captioned the pic: “Wishing all my followers the happiest new year!! 2019 was a very positive year for me… winning The Voice with Molly, toured my album, had long overdue knee surgery, and met an amazing woman in the process!!