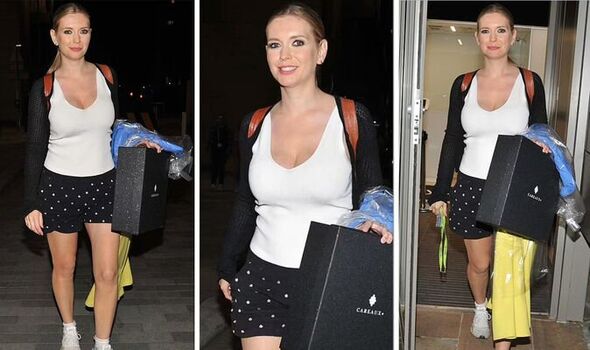 Rachel Riley, 36, looked in good spirits as she was seen for the first time on Tuesday night since she explosively suggested that Strictly is “fixed” – a claim which has been denied by the show.

The presenter beamed as she left 8 Out Of 10 Cats filming in Manchester after causing commotion by saying that producers on the BBC dancing show “know who they want to win from the start”.

Stepping out, she put on a busty display in a white vest top and flashed her toned legs in black and silver-studded shorts.

She completed her look with a knitted black cardigan and wore comfy white trainers and socks as she headed home.

Blonde beauty Rachel wore her light tresses in a sleek ponytail and opted for a glamorous on-screen makeup look.

Rachel was laden down with shopping boxes and bags while leaving the TV studios.

It comes after last week, BBC bosses denied claims made by Rachel that Strictly Come Dancing is a fix and the winner is chosen by bosses.

Rachel was a celebrity contestant on Strictly back in 2013 where she was partnered with her now-husband Pasha Kovalev, 42.