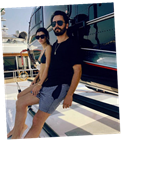 If someone told you that a relationship between a 22-year-old aspiring actress and a 37-year-old father of three was filled with turbulent ups and downs, you might be inclined to blame the actress.

But Scott Disick is striking a blow for equality by proving that dads can deliver the drama as well as any thespian!

As you’ve likely heard by now Sofia Richie broke up with Scott back in May.

The split didn’t seem to be particularly contentious, but it wasn’t like these two amicably went their separate ways, either.

Details remain hazy, but we know that Richie pulled the plug right around the time Disick checked into rehab.

Did he seek help because he was distraught by the breakup, or did Sofia cut him loose because of a relapse that necessitated a return to rehab?

We may never know for sure, but whatever the case, both sides moved on with surprising speed.

Sofia was rumored to be living with a new guy just days after the split, and rumors that Scott was back together with Kourtney Kardashian were everywhere on social media.

(The fact that Scott and Kourt encouraged those rumors added to their credibility.)

So needless to say, the news that Scott and Sofia are apparently back on came as quite a shock to fans.

Technically, they’re hooking up and “spending a lot of time together,” but they’re not officially dating again,

But we think it’s pretty obvious where all of this is headed.

It’s been reported that Sofia hoped to teach Scott a lesson by breaking up with him, and indeed, it seems like he was the one who needed to make some changes in order for this relationship to continue.

A source tells In Touch that Disick has been “working on himself” in order to meet Richie’s standards.

“They don’t want to jump into a full-blown relationship or anything like that,” says the insider.

“They’re taking baby steps and are spending time together and seeing where it goes.”

The source adds that Scott and Sofia both needed some time to “reflect on their relationship.”

And apparently, now that they’ve done so, they decided that they really miss having sex with one another.

“While they kept in touch and remained on friendly terms during the split, they missed being around each other,” says the insider.

“It’s one of those ‘absence makes the heart grow fonder situations.’”

The source says the couple split when Scott hit an emotional rough patch, and Sofia felt that she was ill-equipped to see him through it.

Sofia “tried to be there” for Scott upon his return home from rehab, but her support didn’t seem to help his mental state, the insider claims.

Could it be that Scott spent all that time with Kourtney simply so that she could guide him through that difficult time so that he could then return to Sofia?

It sounds crazy, but Kourt has demonstrated an insane level of emotional maturity over the years.

And she’s made it clear in the past that she wants Scott to be happy and healthy so that he can be the best possible dad to the cormer couple’s three kids.

This is the future of exes, folks!