The Woman Behind @NorisBlackBook Is Serving Hilarious Kardashian Commentary On IG 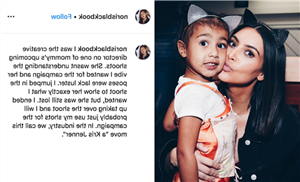 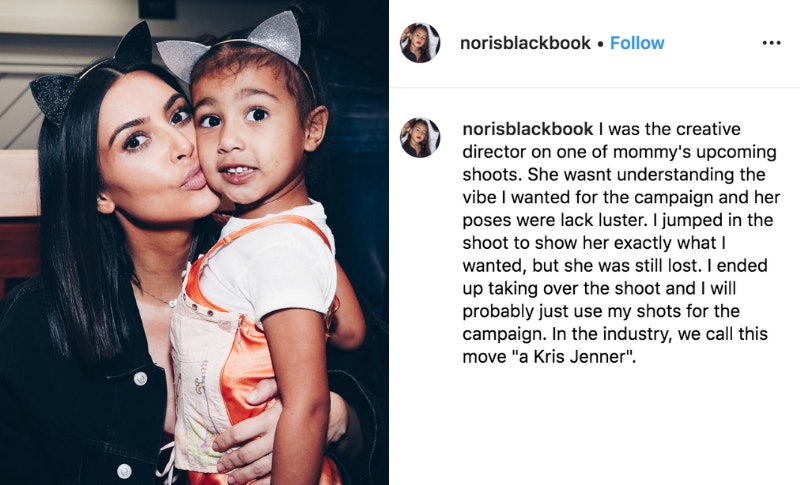 In a post-Kardashian world, every millennial thinks they have what it takes to go viral, but few consider what that online fame actually looks like in a person’s daily life. In Elite Daily’s new series Life Behind The Likes, we speak with the people you know on the internet — from the people behind major Instagram accounts to the Daaaaamn Daniels of the world who went viral for one remarkable moment of their lives — to meet the people behind the screens.

It’s no secret the Kardashian clan knows a little something about breaking the internet, and the imagined musings of North West on the parody Instagram account @NorisBlackBook play on that strength. Calabasas’ First Family is constantly keeping us apprised on all the drama, glamour, and scandal that accompanies their lives on social media. Considering Kendall and Kylie Jenner have already taken their place as social media powerhouses, it can be entertaining to imagine what the youngest generation of Kardashian-Jenners might eventually bring to the platform.

That’s the idea behind Nori’s Black Book, which invites users to keep up with a fictionalized version of Kim Kardashian and Kanye West’s eldest daughter North and her imagined, hilarious, and oftentimes shady commentary on the family’s hijinks.

Kim and Khloé Kardashian, Kris Jenner, and Kanye West have been known to "like" and reshare the account’s often-viral posts. Considering the account boasts 1 million followers and counting, including celebrities Paris Hilton and Emma Roberts, you might be wondering: Who is the face behind North’s sassier-than-thou alter ego?

Back in 2015, California resident Natalie Franklin — who ran the Nori’s Black Book account anonymously up until 2021 and asked to go by Bianca for this piece when it was first published in 2019 — was just another fan keeping up with the Kardashians when she struck comedic cold with a parody Tumblr account. The weekly TooFab contributor says she drew inspiration from Kardashian and West to develop the North parody.

"The way I create North, she’s such an exaggerated version of Kim and Kanye," Franklin says. "Like, Kim and Kanye are already two big egos, two big personalities, and North — the one I created — is that times 50."

KUWTK fans and non-fans alike will chuckle at the posts, which are written in the voice of a very sassy 5-year-old who has no time for her brother Saint, plebeians, or Kourtney Kardashian’s relationship with Travis Barker.

Included in this invented personality is Kardashian and West’s love of all things fashion, which provided the basis for her very first post about the then-infant’s distaste of one of her first modeling gigs.

Franklin recalls she was hanging out with friends when the group found humor in the fact that the future style maven was sporting the Kardashians’ Babies ‘R Us clothing line instead of the designer threads she was no-doubt used to.

"I just made fun of how p*ssed North is that she’s not wearing Gucci or Versace — she’s in this Babies ‘R Us line. We were joking around, and I thought, ‘I should just write this down, right?’" she remembers. "It’s something me and my friends could laugh at. I put it on Tumblr and thought, if 100 people like it, that’s amazing to me."

The post quickly surpassed the 100 "likes," and the account gained 86,000 followers. While Franklin originally didn’t plan to move the content over to Instagram from Tumblr, she admits that doing so was a turning point for the account because "everyone has Instagram." Despite the early success of Nori’s Black Book, however, she credits Kris Jenner and Kanye West for making her account go viral and bringing in a flood of new followers.

"It’s funny, because quietly, the Kardashians start following it and ‘liking’ it. I don’t know which post it was, but other people would tell me, ‘OMG Khloé liked that picture, Khloé follows you, Kris liked that picture.’ Slowly, that happened," Franklin says, revealing how things really started taking off after a parody post about Kris looking for an assistant on Bumble landed on The Real talk show in May 2018.

Still, that wasn’t anything compared to the Kanye effect, when the "Gold Digger" hitmaker decided to reshare a post about North walking her first fashion show to his Instagram and Twitter accounts in 2018.

"He did it in the most Kanye way," Franklin remembers, laughing. "He took a screenshot of it, didn’t tag me at all, so people went and found my page. It was very [typical of] someone who doesn’t use social media, using social media."

She continued, "That’s when things really got big, and this is after Kim and Khloé were already following me. After that happened, that was like, ‘OK. People are paying attention.’"

Franklin works to toe the line between highlighting the oft-ridiculous aspects of the Kardashian-Jenner clan’s lives and the real issues they deal with in the public eye.

"I think the fans like it because I’m not cruel with it," she says. "It’s very easy to make fun of Kim and her sex tape or her plastic surgery, but it does take a bit of smarts to make fun of them in a way that’s not cruel, and in a way that, obviously, they can laugh along with it."

She cites Kim’s robbery in Paris and Khloé’s split with Tristan Thompson as subjects she’s tried to cover sensitively, saying, "I don’t go for the low-hanging fruit, I guess. I don’t go for the cheap laugh. My sh*t is very, very complicated and complex."

That’s not to say she hasn’t had a post or two that’s been lost in translation (Franklin admits that she deleted a post that a few users mistook to make light of Kanye West’s mental health struggles), but most of her followers have found humor in the situations she covers. A prime example is the 16-year age gap between Scott Disick and Sofia Richie, who broke up in 2020.

"There was one post I did about the anniversary of Kanye’s College Dropout album," Franklin recounts about one of her favorite posts, laughing. "He released College Dropout 17 years ago. And I was like, ‘2004 was also a big year for Sofia. She started kindergarten.’ It was perfect."

With no shortage of hilariously shady insights, it’s not surprising Nori’s Black Book has gained quite a celebrity following.

"I know Paris Hilton follows, Emma Roberts follows, I’m sure other celebrities follow, too. Everyone knows about the Kardashians and they’re such a genre on their own," Franklin says, adding, "Definitely, Kim following has been my best moment in life."

She continued, "It was cool when Khloé followed, and then Kris, but when Kim followed, and sometimes she’ll even ‘like’ or comment, that makes my life right there. Because I’m a big fan of the Kardashians. I have to be to be able to write like this, so that’s just amazing to me."

Franklin arguably had a new “best moment in life” when she met Kim and Khloé IRL, which was documented in a May 2021 episode of Keeping Up With The Kardashians, and officially marked the end of Nori’s Black Book being anonymous. Franklin wrote on Instagram after the episode aired, “Wow…what a moment! Thank you Kim and Khloé for the amazing experience of being on KUWTK!” She also gave North West herself a shoutout, saying, “Above all thank you to Ms. North West for being born! She’s an icon, she’s a legend and she is the moment! I owe you everything! I will keep writing NBB as long as North lets me!"

Franklin says that she first drew inspiration from Tumblr account Suri’s Burn Book, which dishes out celebrity critiques in the form of a very snarky imagining of Tom Cruise and Katie Holmes’ daughter, Suri. Author Allie Hagan transformed the Tumblr blog into a book deal and a TV writing gig for Notorious. Franklin hopes that she can continue on a similar trajectory.

"I would love to write a TV show or some kind of book, maybe a coffee table book," she says. "Something that’s not too serious, and where I can write quick, witty things."

In the meantime, she’ll be keeping an eye on the rest of the Kardashian-Jenner brood as they grow up, looking for another North-level contender to come along.

"North has so much personality that can’t be matched, and her parents do too, but it would be cool if I could start one for Stormi or another Kardashian-Jenner kid that comes along with the same personality," she says.

One thing that’s not changing anytime soon? Franklin says she just wants to keep Nori’s Black Book fun. She says, "I want people to use their imagination as much as possible, to have a good time, and enjoy it for what it is."

This article was originally published on July 10, 2019