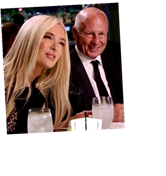 In November of 2020, fans were stunned as Erika Jayne and Tom Girardi announced their divorce.

Fans speculated wildly about causes, citing everything from cheating to a clever financial ploy.

This week, fans got answers that many had never imagined.

Tom has lost his license to practice the law … after being diagnosed with Alzheimer’s.

Us Weekly reports that on Wednesday, March 10, an affidavit written by clinical psychiatrist Dr. Nathan Lavid was filed.

In that document, Dr. Lavid offered attested that the 81-year-old suffers from “moderate” delusions and impairment.

According to the affidavit, Tom is unable to attend court hearings on any matters and will remain so “for the foreseeable future.”

“His emotional distress is directly related to his dementia,” the affidavit continued.

“And,” Dr. Lavid warned, “exacerbated by his confusion.”

This news comes after news from earlier this week about Tom’s law license.

The State Bar of California declared that Tom is “not eligible to practice law.”

Now, it seems clear that Tom’s lack of eligibility is due to his diminished mental capacity.

It takes more than just obvious public signs of cognitive struggles to lose a law license.

(This topic was broadly explored late last year, as many members of the public wondered how Rudy Giuliani was still permitted to practice)

Tom Girardi has previously claimed in court that he is flat broke, saying that he doesn’t have “any money” left.

He is currently being sued by partners Robert Keese, Robert Finnerty, and Jill O’Callahan.

“There was an urgent need for Bob Girardi to have the power to engage counsel in the bankruptcy proceeding on his brother’s behalf,” Tom’s attorney explained in February.

Robert claimed in court that Tom’s current cognitive struggles make it impossible for him to manage his own case.

He claimed that Tom is “incapable of realizing and understanding the repercussions of the bankruptcy filings pending against him and the Debtor.”

Robert is preparing to pursue a permanent conservatorship over his brother’s estate, personal matters, health, and even day-to-day activities.

With conservatorships being a hot topic among disability rights advocates and the #FreeBritney movement, this is a now familiar topic.

There have been a number of calls for laws on the matter to change in order to safeguard against abuses.

However, many have noted that some people do need help managing their lives … and Tom may be one of them.

Erika has not publicly commented on Tom’s alleged health issues.

It is expected that all of this and more will be brought up on Season 11 of RHOBH, which of course is currently filming.

This is an understandably sensitive topic for Erika, with or without the divorce.

She has to be weighing how much to discuss in public … but this news going public may give her license to address it on camera.

If she doesn’t talk about it herself, we all know that her castmates will. …