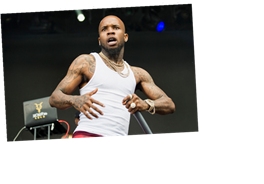 This follows the initial firearm charge that he was booked for in July. Fans of both rappers are digesting the news on social media as we speak.

In the early morning hours of July 12, Lanez was arrested for a felony gun charge after the shooting incident. He bonded out with a court date set for Oct. 13. The Los Angeles District Attorney’s office continued their investigation and announced a new felony assault charge against him today, Oct. 8.

Per the press release, the victim is a 24-year-old female friend and the incident happened in Hollywood Hills. That is clearly a reference to Megan Thee Stallion.

“Daystar Peterson aka Tory Lanez (dob 7/27/92) was charged today in case BA490599 with one felony count each of assault with semiautomatic firearm – personal use of a firearm – and carrying a loaded, unregistered firearm in a vehicle. The defendant also faces a gun allegation and that he personally inflicted great bodily injury.”

The media release mentions the victim was riding in an SUV with the defendant when they got into an argument. Lanez (Peterson) allegedly shot at her when she exited the vehicle.

According to the announcement, he’s facing a maximum of 22 years and eight months in prison.

On social media platforms such as Twitter and Instagram, fans are either supporting the decision or calling out, “FreeTory.”

Tory Lanez shifted the conversation about the incident after dropping his Daystar album on Sept. 25, causing many to condemn his actions.

Lanez used the project to talk about his supposed romantic relationship with Megan Thee Stallion, diss his naysayers for accusing him of a crime, and proclaim his innocence. He also accused Megan of lying.

Divided fans chose sides with some switching to Tory Lanez after initially believing Megan. A number of his fans felt like his new songs backed up their theory about the case.

On the flip, a host of fans and celebrities criticized Lanez for making light of the “Savage” rapper’s pain and for doing an album at all.

At first, Megan Thee Stallion refrained from naming a shooter but eventually spoke about the event on Instagram Live. She accused Lanez and his camp of spreading lies and said she didn’t want to speak out due to her fear of police brutality and wanting to protect him as a Black man.

What’s next for Tory Lanez?

The D.A.’s office indicated that the incident is still under investigation. Tory Lanez’s camp hasn’t issued any statements about the arraignment, but his family and friends have continued to defend him against the allegations. His father, Sonstar Peterson, appeared on Mob Radio to declare Tory’s innocence.

Megan Thee Stallion hasn’t commented on the charges but earlier on Oct. 8, dropped her own announcement. She’s offering two $10,000 college scholarships to women of color who are pursuing an associate’s, bachelor’s, or postgraduate degree in any field.