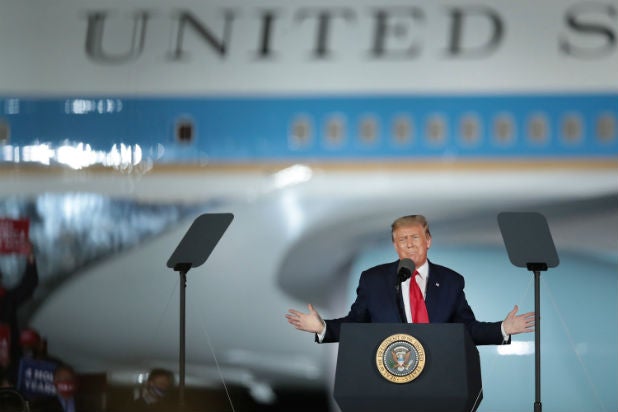 A Donald Trump rally in Michigan was the scene of yet another oddly ironic soundtrack on Thursday night as attendees were treated to the Creedance Clearwater Revival classic “Fortunate Son” as Trump arrived at the event.

Originally released in 1969 at the height of the Vietnam war, the song ruthlessly criticizes class inequalities like the widespread access to deferments, or to safe military appointments provided under dubious circumstances to young men from wealthy or connected backgrounds — despite the draft that sent more than nine million military personnel to Vietnam between 1964 and 1975

Some people say that group includes Donald Trump himself, who in July, 1968 was deemed medically fit for military service after the last of 4 consecutive student deferments ended. However, just two months later he received a medical deferment for unknown reasons, which was made permanent 4 years later due to what Trump claims was a diagnosis of bone spurs. There have been numerous questions about this over the years, particularly because no proof of this diagnosis was preserved, and on more than one occasion he appeared to forget on which foot he experienced the problem.

So just knowing that context, it sure seems weird that whomever was in charge of music for the rally selected this particular CCR song.

Watch the weird scene below, courtesy of journalist Dave Weigel:

For those keeping score, this comes just 4 months after another (perhaps unintentionally) hilarious ironic musical accompaniment at a Trump event. Last May, as he was touring an Arizona factory that makes N95 masks while notably not wearing one, the overhead speakers blared Guns ‘N Roses’ cover of the “James Bond” theme song “Live and Let Die.” 2020, amirite?

Anyway, in fairness to Trump he’s far from the only Boomer politician whose Vietnam-era history has been severely scrutinized. Other notable examples include: Bill Clinton, who received 2 student deferments before lucking out with a high draft number; and George W. Bush, who was accepted into the Texas Air National Guard during a period when new recruits were not being accepted, despite a poor academic record and several arrests.

Meanwhile, we have no idea yet if, like a lot of other artists, the song’s composer John Fogerty opposes this particular use of the track. But it must be said that while “Fortunate Son” is an odd choice on a contextual level, it is a G R E A T song, so on an aesthetic level, it’s a solid choice. But don’t take our word for it. Listen for yourself below: