“I said break it up,” exclaims Seth Gilliam’s Gabriel as exhausted and nutrition deprived residents of a shattered Alexandra fight over food in tonight’s debut of the 11th and final season of The Walking Dead.”There’s enough food for everyone,” the priest and council leader adds, but the hard truth is there isn’t. 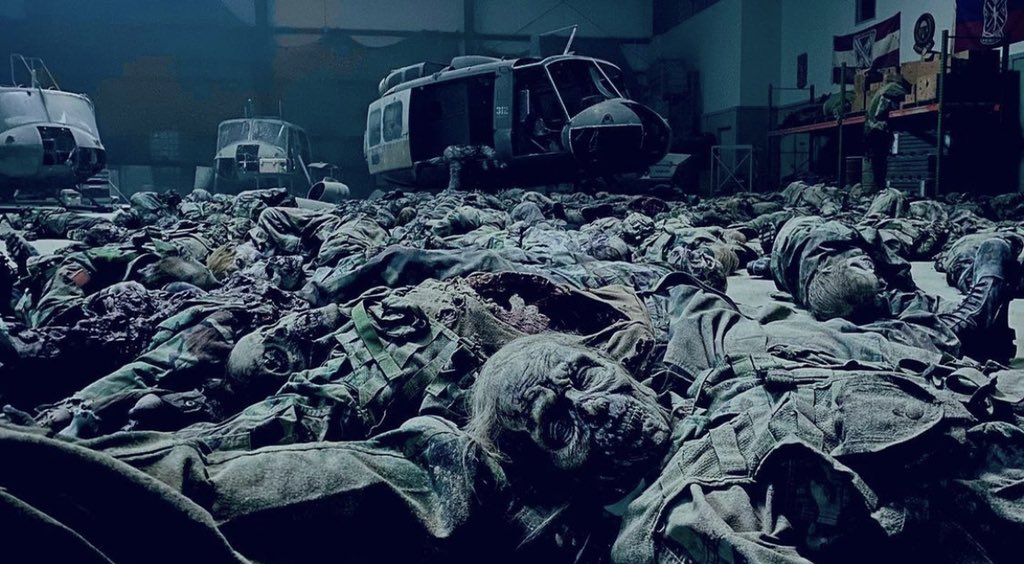 Even after Lauren Cohan’s Maggie, Norman Reedus’s Daryl, Melissa McBride’s Carol and crew of Survivors fought to haul much needed supplies out a base full of dozens of suddenly awakened zombified military personal, things got even bleaker in the “Acheron: Part I” opener penned by Jim Barnes and show runner Angela Kang

Ending with a dark cliffhanger for Maggie in the tunnels under Washington DC and heading into a last run that will go well into 2022 and beyond, the zombie apocalypse series based on Robert Kirkman’s comics literally began with a bang Sunday. In that context and with the ongoing deadly tension between Maggie and the Jeffrey Dean Morgan portrayed character who killed her husband and her friends back at the start of Season 7, Kang spoke with me about the beginning of the end that started Sunday

After delays and production during a pandemic on the mothership that is spawning a number of spinoffs, the EP also discussed how TWD could all end — and if the likes of Andrew Lincoln’s Rick Grimes is coming back, or not.

DEADLINE: So, with a cliffhanger and all the first episode of the two-part opener of your mega final season has aired on cable and the second episode is on steaming, coming to TV next week. The table is set now, but what’s on the menu going into these final episodes?

KANG: I think for our Survivors, they’ve been through a lot over time, and coming off of what happened with the Whisperers, they’ve just found that in tangling with a community that really just didn’t believe that civilization as we knew it should exist, they did everything in their power to kind of make that come true for our people

DEADLINE: No one would argue that …

KANG: Exactly! So, it’s kind of knocked them down to a really basic state of dealing with issues of food and shelter and safety, things that I think they had taken granted for a while. Not that they haven’t had waves where it’s been hard, but it’s really like the one thing that they felt that they could rely on, which was like the safety of home, is so much more challenging because everybody is sort of merged together.

So, this just adds a level of tension and danger to the society that they don’t usually deal with, and it’s really just exacerbated by the fact that everybody has folded into this one community, when they were once multiple that were spread out.

DEADLINE: The 24-episodes of the final season are laid out in three chucks, so to speak. Are we going to see two-parter resets for each set of the final episodes?

Though there are definitely some episodes that feel more tied to each other than others do.

In this case, Jim Barnes and I, who wrote this premiere block, we set out to write one episode, but we found ourselves basically with two episodes’ worth of material. So we’d wanted to air it as one longer episode. But as you know, the airing order is all determined ahead of time by AMC. So, they’re like, yeah, you’re going to have to break it up. So, that’s how we wound up with a two-parter in this case, but you know, we don’t always do that.

DEADLINE: One thing you always do in Walking Deadland is play your cards close to your chest. So, in what may be a futile effort, I have to ask, with this last season drawing so heavily from the Commonwealth story in Kirkman’s comics and Rick Grimes being a huge part of that, are we going to see Andrew Lincoln return? I mean, it would make a great launch for the TWD movies he’s slated to star in, no?

KANG: (LAUGHS) Yeah. I’ve been getting this question a lot, and it is one question that I cannot get into, so, yeah, I’m going to have to respectfully evade.

DEADLINE: you know your respectful evasion is going to make you, like Thomas More in A Man for All Seasons, that in evasion, people are going to see assent.

KANG: I think, you know, it really, truly, doesn’t mean one thing or another, but there’s other things happening in the franchise. There is universe implication. So, there’s a lot that’s sort of like not really under my umbrella.

DEADLINE: You gave me the answer I expected, but did not want. I want now to get a sense of are we going to see some other prominent past characters and actors make an appearance in these final seasons, in these final episodes?

DEADLINE: Then shifting focus, how game-planned out to the end are things right now? Are the final scripts for the final episodes in?

KANG: All the scripts are not in.

Out of 24 episodes, there’s still a road to travel because unlike a lot of network shows that do this many episodes, it’s me and like seven people — so, we have to rotate onto each block.

But we do have it all planned, in a big-picture sense, to the end. We, of course, had to pitch the whole thing to AMC because they want to sign off on how their franchise and specifically this mother ship ends. Then within that, there are the individual episodes. We always go through a process where things like beats and details change. But we do have a really clear sense of what we’re doing all the way to the end. We’re pretty far in our writing process.

DEADLINE: In your process to the end, is it a pretty clear hand-off to the Norman and Melissa spinoff series?

KANG: Without getting into any spoilers or details, there’s definitely a hand-off. But you know, it’s also like this show has to end itself separate from whatever other things may spawn from it.

So, hopefully, there will be something that feels like an end to this story, regardless of a spinoff. But obviously, the spinoff, which I’m working on, is very important to us. So, we’re trying to kind of balance all those needs.

DEADLINE: As far as you are in the actual writing, are you happy with the way the end is all landing – cause series finales can be such a killer, like The Sopranos ending that was so widely scorned at the time and now everyone says it was genius.

KANG: I’ll say, we definitely pitched out the endpoint for the finale, and we had a good reaction internally.

But really, I think finales are, as you say, are notoriously difficult to nail, you know, because you’re kind of trying to put the weight of an entire series. So with all of that weight is in one episode, and I do think it’s really, really difficult. For us, our approach was to kind of talk about what we think just the themes have been, where it started, and what was kind of the line that the comic book tries to follow.

DEADLINE: Has the process seen the endgame alter, as you’ve filmed through the pandemic? 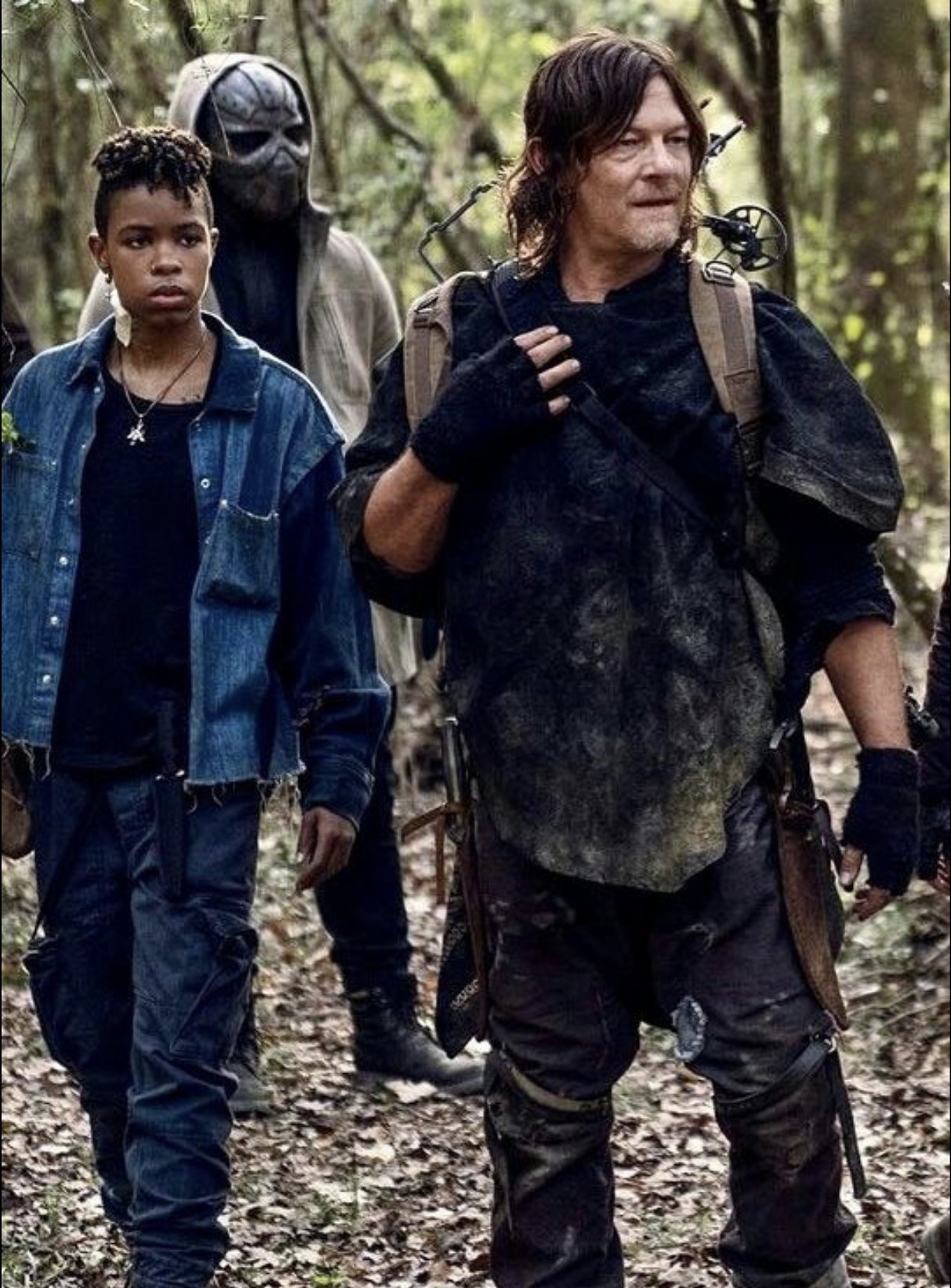 KANG: Between the time we pitched it and now, there are some, I think, things that are evolving for the better. You know, we’ve got a little more time to finish figuring out like all the details of that story and try to nail it.

DEADLINE: To quote Yoda, there may be no try …

Hopefully, we nail it, but you know, for whatever it’s worth, I’m one of the people that actually liked The Sopranos‘ ending at the time it aired. I think opinions do change, sometimes. Six Feet Under is one of those rare finales that really, truly nailed it, but I think it’s because they nailed what that show was about at the end of the day. So, I hope that our approach in that way worked, but you know, like I said, like we’ll have to just put it out there and see if the fans think we got it right.

DEADLINE: One of the things that I think a lot of fans think you guys have gotten right in the years since you have been showrunning TWD the past three years is the sheer horror of it all. There was a lot of classic horror in Acheron: Part I, especially down in those DC tunnels. Is that an overall approach we’re going to see a lot of in the final season?

DEADLINE: How does shooting in the pandemic affect that?

KANG: I think part of the thing that’s happened with the pandemic is that it’s harder to do straight action because it’s just that requires a lot of bodies in close contact. There’s a lot of safety considerations on top of Covid. So, the show has sometimes done like tons and tons of like very stunt-y, big action, and then there’s times when we’ve done more the slow creeping tension.
We were filming this back in January, and to be honest, you know, even kind of doing the number of zombies and things that we did was very challenging, and we had a lot of questions about how we could handle it.

DEADLINE: So, on zombies proper, because “Acheron: Part II is now online on AMC+, let me just throw it out there – zombies on the DC Metro?

KANG: Zombies on the Metro. Yeah. That was fun for us.

DEADLINE: I just think that’s a whole low-fi spin-off show unto itself.

KANG: (LAUGHS) I know. We had fun with that. We’re always trying to find environments we haven’t done before, and so, that was one that we thought would be neat, would be fun to do. It was a lot of work, too.

DEADLINE: I bet. I do have one more question for you out of that.

DEADLINE: Are we going to see zombies in the White House on TWD?