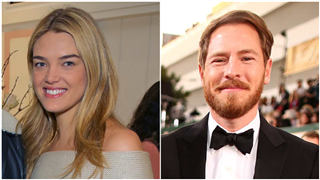 Congrats are in order for Will Kopelman and Alexandra Michler! The art consultant, who was previously married to Drew Barrymore, tied the knot with the Vogue editor over the weekend.

Kopelman shared the news on Instagram on Sunday, sharing a stunning photo from his and Michler’s wedding on Saturday. The pair cozy up underneath Michler’s veil in the pic, which shows her wedding dress sweeping in the foreground, and a picturesque lighthouse in the background.

“8.28.21,” Kopelman captioned the shot, as friends offered their congratulations in the comments.

Kopelman and Barrymore’s two daughters, Olive and Frankie, appear to have been in the wedding, according to photos posted by Kopelman’s sister, Odd Mom Out creator Jill Kargman.

News broke in December that Kopelman was dating Michler. He and Barrymore announced their separation in April 2016 after nearly four years of marriage.

In an October interview on Sunday’s Today with Willie Geist, Barrymore opened up about healing from her and Kopelman’s split, and choosing to remain close with his family.

“I don’t think I would have been able to talk about it as openly at first because I couldn’t make sense of it,” she admitted. “I really did not take divorce well. I took it really hard. But the good news is that his family and I sort of made the most important choice to be so together and united and connected. That’s I guess what they call family.”

Barrymore added she was really happy, and enjoying life with her and Kopelman’s daughters.

“They’re really cool with things. It was interesting because when they were younger this whole life of mine didn’t sit as well with them,” Barrymore said of Olive and Frankie. “And now it’s the exact opposite. Like divorce, things fell into place finally. It’s amazing that my kids and I are happy because there’s been a lot of times I really did question like would we be happy and we are. So that chokes me up. My girls are happy. I’m happy.”

See more in the video below.