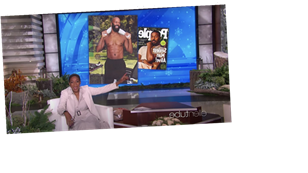 Although rapper Common wasn’t crowned People‘s Sexiest Man Alive this year (that honor went to Michael B. Jordan), Tiffany Haddish still considers him her sexiest man alive. During her stint as guest host of The Ellen DeGeneres Show on Nov. 20, Tiffany revealed she had a hand in helping boyfriend Common look his best during his People photo shoot. “I helped him with those abs,” she said with a laugh. “Now, y’all can look but you can’t touch, alright? That’s for me.” Common was included in the issue as one of the men who made 2020 bearable.

Initially, Common wasn’t too thrilled at the idea of makeup being used to define his abs, but Tiffany’s wisdom prevailed. “He’s doing all these crunches and push-ups and I’m like, ‘Nah, that’s not gonna work,'” she told the audience. Rumors of the pair’s romance first surfaced in April, but it wasn’t until August that Tiffany confirmed their relationship status. You can see just how committed Tiffany was to making Common’s abs look good in the full video above.

Related News:
Latest News:
Paris Berelc To Guest Star On New Series ‘The Crew’ – Watch the Trailer!
14 Astrologically Compatible Celebrity Couples Who Broke Up & Shocked Fans
Does Jimin From BTS Wear Glasses?
Elizabeth Olsen says growing up with famous sisters was a 'unique' experience
Recent Posts
This website uses cookies to improve your user experience and to provide you with advertisements that are relevant to your interests. By continuing to browse the site you are agreeing to our use of cookies.Ok